Finn Hudson and the Case of the Missing Original Intent: Part Four 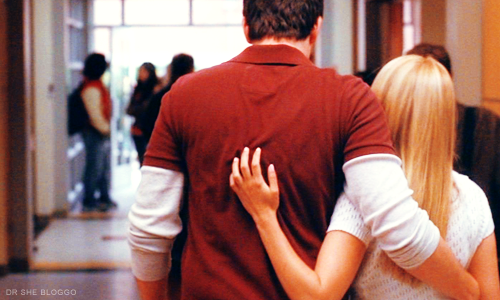 FINN AND QUINN, THE EARLY DAYS
I suppose I can’t write pages about how Finn’s original intent has now escaped from our screens without addressing how it manifested itself in the First 13.  If I allow those early episodes to get off scot-free from criticism, I’d better be able to back it up, right?

Well, what makes Finn’s journey through the First 13 successful is the faithfulness to his original intent combined with a compelling backdrop for the character to interact with.  He said yes to Glee, didn’t turn back, and was then put in a position where he had to immediately negotiate this self-discovery with the prospect of becoming a father.  Finn discovered who he was and instantly had to put that to the test by dealing with situations far beyond his maturity level.

It’s true that Finn made some mistakes in the First 13 episodes - he kissed Rachel twice while still dating Quinn, and even took advantage of Rachel’s feelings for him in order to get a scholarship in “The Rhodes Not Taken.”  But I don’t expect a character to be perfect.  I do expect to sympathize with their decisions at the hands of the writers, however.  And these missteps were interesting - and even understandable - in the framework of what Finn was going through.  He was a sixteen-year-old guy in the midst of self-discovery who believed he was about to be a dad.  It’s enough to mess with anyone’s head, and it’s because of this that I can usually forgive Finn for his slip-ups in the early episodes.

What more, Finn’s actions in the First 13 indicated that he was trying.  He was trying so hard to be a good boyfriend to Quinn, and to step up and be a good father.  His intentions were clear, and, to be expected, he experienced a few blunders as well as successes.  That’s fine with me - I don’t care if Finn fails.  I care if he has good intentions and if he tries.  He needs to be earnest and open, because that is embedded in his character.  He may not be the best singer or dancer, but he still gets up on that stage and tries.  The boy sang “I’ll Stand By You” to a damn sonogram, for goodness’ sake.  The true intent of his character is that he tries, earnestly and genuinely, and it absolutely needs to carry over into other areas of his life.

Even though many would define Finn and Quinn’s relationship as unhealthy, it’s hard to dismiss it entirely because at least Finn’s participation in it held true to his character.  He had surrendered himself to the events in his life, and tried his best to keep up with what was being thrown at him.  Unfortunately, his relationship with Rachel has none of the same hallmarks of Finn’s characterization - almost every step of their dynamic this season has been met with resistance.  What happened to the boy who opened himself up to joy?  “Resistance” is not a word we should be using to describe Finn in any way, and it’s unfortunately becoming a defining factor in many of his interactions on the show.

Some would argue that the change we’re witnessing in Finn is a direct result of the devastation of his relationship with Quinn, and in some ways, I would say that they’re right.  His actions in “Hell-O” seem to indicate that Finn has Quinn issues, and they are entirely founded.  Her treatment of him, combined with the colossal lie she told him, can understandably shake his character’s foundation.

On a semi-related note, the same argument could be made for the U-turn in Mr. Schuester’s portrayal on the show - in the wake of his imploded relationship with Terri, he has indulged in some serious asshole behavior.  His character has become impulsive, depressed, and a poor decision-maker who yells at his students - a shadow of what he originally was at the start of the show.  What’s interesting is that the characters of Finn and Will were intended to mirror one another in the First 13, and that they have both generally derailed in the episodes since.  Coincidence?  Maybe, maybe not.  In some ways, each of the characters have derailed since the First 13, but that’s another post for another day.

If, however, the cause for Finn’s (and Will’s) general out-of-character behavior is indeed the aftermath of a disastrous relationship, well, then it needs to be clear.  You can read between the lines all you want, but the fact of the matter is that if we’re supposed to believe this is true, then there needs to be more actual evidence to support it.  The writers need to acknowledge it, and include it in the storylines.  It needs to be a part of the plots, not just in random bits of dialogue ever few episodes or so.

Because, as it is, it just looks like RIB got sloppy in writers the character and what could have been interesting development and a continuation of previous conflicts only appears to be poor characterization and lack of sophistication in progressing a character arc.

NEXT: FINN, CHOICE, AND PASSIVITY


---
Master Post: FINN HUDSON AND THE CASE OF THE MISSING ORIGINAL INTENT
Part One: FINN, SELF-DISCOVERY, AND JOY
Part Two: FINN, KURT, AND OPEN-MINDEDNESS
Part Three: FINN, RACHEL, AND THE FINCHEL CONSTRUCT
Part Four: FINN AND QUINN, THE EARLY DAYS
Part Five: FINN, CHOICE, AND PASSIVITY
Part Six: FINN IN THE EYES OF THE WRITERS
Posted by DR SHE BLOGGO at 8:43 PM