My Fears For Shiloh: Why the Scrutiny is Sexist, Homophobic, and Harmful

Sometimes I think I don't have enough opinions.  Then I browse the internet for oh, fifteen minutes, and the sheer amount of idiocy I see is enough to get me ranting about something.

Today, it's this article from Autostraddle, which chronicles and comments on the American media's obsession with Shiloh Pitt's tomboy style and the overblown and offensive fear that it's harmful to Shiloh in some way.  Yesterday, Life & Style Magazine published this article that's featured on the front page of the Feb. 6 issue - with the headline "Brad Pitt's Fears for Shiloh."  Let me be clear, right off the bat: it's not Autostraddle I'm ranty at.  It's Life & Style that's getting the major side-eye. 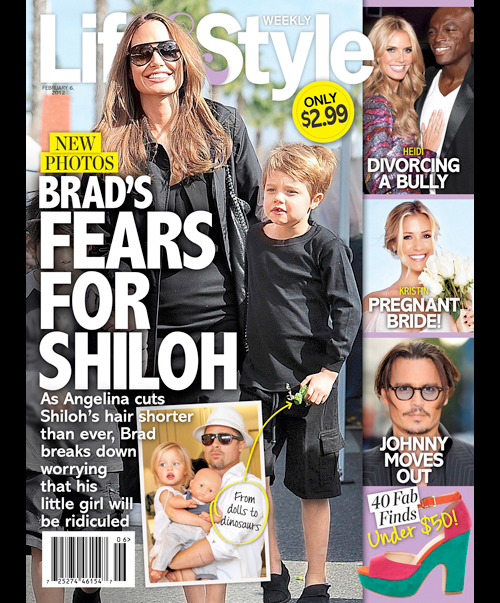 There's several layers of awful at work here, and none of them have to do with the way that Shiloh Pitt dresses or what kind of gender identity she seems to be adopting.  She's a five-year-old kid.  It doesn't matter if she wants to be a boy now, or at any point in her life.  Not my business.  Not the media's business.  And she's completely entitled to any gender identity, as an individual - be it now, or in the future, regardless of what that identity is.

Now, to the points:

Firstly, it's bad enough that gossip magazines are so obsessed with a little kid that they plaster her all over their pages - just because she's born to Brad Pitt and Angelina Jolie.  The fact that media fascination with celebrity spills over into an exploitation of their children is just ground floor on a tower of Intrusive and Nonsensical Bullshit.  You could stop the argument right there and it'd be enough to loathe the article, the cover story, and the fact that apparently this sells magazines.

But on top of that, we have still a serious pile of feminist issues to sift through.  Why is it that there's so much scrutiny over the way Shiloh dresses?  Putting commentary like this on the covers of magazines only contributes to what so much media says about women: it's important what you look like.  How you dress.  How you present yourself.  How much makeup you wear.  How much you weigh.  If you're smiling, or if you look upset, or angry.  Even when you're five, appearance means everything, and there's less value on what comes out of your mouth.  (Unless it's rude, or rocks the boat, or speaks out against something.  Then you're a bitch who's Way Out of Line.  But that's another rant for another day.)

There's also the rigid expectation of young girls in particular - the "Sugar and Spice, and Everything Nice" effect.  Girls are "supposed to" wear pink.  Girls are "supposed to" have long hair.  Girls are "supposed to" play with dolls.  Life & Style has this philosophy pegged - it even scrawls the chicken-scratched arrow pointing to the change in Shiloh's toys - "from dolls to dinousaurs!"  Because apparently dinosaurs are only to be appreciated by boys.  Somebody should have told me that before I committed every line of dialogue from Jurassic Park to memory.  (I can also tell you that according to that movie, dinosaur eats man, and woman inherits the earth.  Spoiler alert.)

There is no criticism of the way Shiloh's male siblings dress.  (Several comments at the Autostraddle article point out that Maddox and Pax have long, "feminine" hair, and no one's up-in-arms about that.  It's an excellent point.)  Technically, there's not criticism of Shiloh's female siblings either, because they're not "outside the norm."  It's here where we reach an issue of gay rights, visibility, and the messages we're sending about parenting and gender identity.

Here's the question: what's the big deal if a little girl expresses herself differently than society has deemed "appropriate" for little girls?  To quote the article:

In fact, one onlooker even mistook the adorable little girl for one of the Jolie-Pitt boys. "It was very chaotic," Lynda Stenhouse, who was at the market, tells Life & Style. "She rushed by my section, but I did notice her skinny white legs and the commotion of the boys."

Now, in the new issue of Life & Style, sources reveal that while the proud parents encourage their little girl to be independent, Brad is concerned about the scrutiny to which Shiloh is being subjected.

Firstly, I gather that any chaos that arises when the Jolie-Pitts are at the supermarket has more to do with the fact that the most media-hyped celebrity family is in a public place with the plebeians, and not the result of their daughter's androgyny.

Secondly, that quote actually contributes nothing to the article's argument, and can basically be ignored.

Thirdly, I can't figure out if Life & Style realizes that this alleged "scrutiny" Shiloh is being subjected to comes straight from their own magazine covers.  The headlines associated with this "story" are so ridiculously sensationalized and offensive:
The fact of the matter is that these magazine covers are far more damaging not only to Shiloh but also to all individuals who consider their gender identity to be something other than heteronormative - especially younger people.  I think you'll find that it's not a fluid spectrum of gender expression that's harmful to children, but rather the negative reaction to it that does more damage.  Rejection of difference from adults and lack of positive reinforcement for nonconformity truly has the poisonous affect on young children, and impact from the media, such as Life & Style magazine covers, can perpetuate that attitude easily, quickly, and enduringly.

It would be plenty regrettable, with the invasion of privacy, the basic feminist issue of expectation and "appropriate behavior," and the offensive suggestion that living beyond the heteronorms is damaging, but sitting atop all this mess is a sneaky sexist cherry: somehow, Angelina Jolie is the one at fault.  Every single one of those headlines specifically blames Jolie's parenting, which has several nasty suggestions.  Firstly and perhaps most innocuous is the assumption that Jolie, in the role of the mother, makes the decisions about what her daughter wears.

But really, the true offense is that they also suggest that Brad Pitt is somehow being hurt by this.  Jolie is vilified in the scenario, and Pitt is painted as the victim who's just worried about his "little girl."  Jolie becomes the villain to both her partner and child, and the relationship between the father and daughter translates easily to condescending paternalism.  The "Daddy's Little Girl" effect slides effortlessly into the "Sugar and Spice and Everything Nice" effect, even when many fathers enjoy playing sports, or having common interests with their daughters.

In sum, this is a shitshow of offensive insinuations.  And, at the very center, is a five-year-old girl.  Let me give you the takeaway, since Life & Style seems to be neglecting the real conclusions to be reaching here.  Let people express themselves however they choose how, and don't try and shame them for being themselves.  Especially when they're little kids, who are only discovering their identity.  Everyone needs to be told that they're okay, and the worst place to deny that right is on the cover of a nationally-distributed magazine.

If you choose to speak out to Life & Style about the problem, the fine people at Autostraddle have compiled the contact info so that I may copy and paste it here: