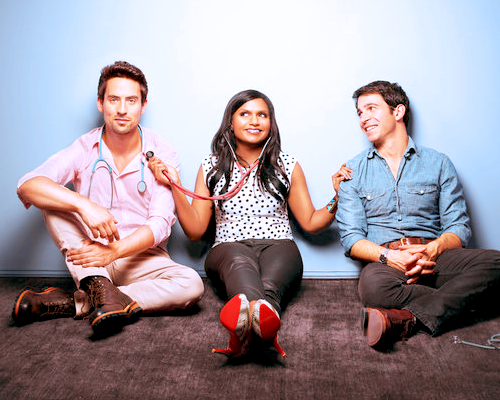 So, I've caught the sneak preview of FOX's new show The Mindy Project, helmed by - and starring - the lovely and talented Mindy Kaling, who previously graced us as a writer on The Office and the woman behind the joy and wonder that is Kelly Kapoor.  I'm super excited that Mindy (I feel like we're on a first name basis) has a solo project, not only because she is a female writer and showrunner, but also a fellow feminist who loves a good (and, okay, occasionally bad) romantic comedy.

And that's the exact premise that Mindy Kaling has built for The Mindy Project: the love of romantic comedy, by a woman who's trying to live a romantic comedy in a television show that is ultimately... a romantic comedy.  With so many layers of romcom going on, this show is in a perfect place to pay homage to, emulate, and make commentary on the genre.

Instantly, the Pilot clued us in to Mindy's obsession with the Hollywood love story, showing her in rapt attention in front of TV sets playing When Harry Met Sally, You've Got Mail, and Notting Hill.  She quotes dialogue from them as her narration plays overhead, and the message is this: after watching so many romcoms, she has an preconceived notion about how her life is supposed to go.  And, in a fantastic reveal, it turns out Mindy is delivering this narration... in a police report.  She'd been arrested for public intoxication and disorderly conduct after attending the wedding of an ex, where, naturally, she gave a drunk toast.  After having a spiritual experience with a talking Barbie doll, Mindy realizes something.  This is not who she is!  This is not where she should be!

So, this kicks off the other half of the show's premise: Mindy's on a quest to change her life.  If not today, then tomorrow, as she tells best friend Gwen at the end of the episode.  She is her own pet project!  This angle is tricky, though.  I'm not terribly put off by the concept, but I do think it has to be executed in a very specific way.  Mindy's self-direction is great when it's Mindy being in charge of her own life and making her own choices for her own reasons.  Who doesn't want to root for a heroine who's struggling to be in charge of her identity?  That in itself is fantastic.  But the issue here that could trip up The Mindy Project is the previous half of the show's foundation: Mindy's expectation that life should be like a romcom.  It's wonderful if Mindy wants to live a self-directed life, but what's the suggestion when Mindy is also a romcom-saturated dating-rule borg?  This flirts with the idea that she's trying to change herself to live her life to a certain standard - one that is not her own, but one that has been packaged up and sold to her by Hollywood.  I don't want the plucky heroine to change herself for the wrong reasons!  I also don't want the plucky heroine to think she has to change herself!

Mindy doesn't even really have dialogue, so much as an arsenal of relationship aphorisms, entirely dictated to her by the collective input of years' worth of romantic comedy watching.  On the one hand, this is great.  I love the idea that The Mindy Project sheds light on the incessant list of "shoulds" and "supposed tos" that go along with being a woman in a media-saturated patriarchy.  But so far, The Mindy Project is just regurgitating romcom tropes into its own narrative.  The show has yet to make any commentary on these constructs, which is important.  For one, it's difficult to become invested in the relationships between Mindy, Jeremy, and Danny - because it has been virtually lifted out of Bridget Jones' Diary, complete with prickly nice guy and endearing English cad.  I can't say I'm all that curious to know where that's headed.  I've seen it.

But beyond that, The Mindy Project won't be able to adequately pay homage to the romcom if it's just emulating its standards.  There's a reason this genre is often derided: so many storytelling devices are overused.  Romcoms have become formulaic, and the exhaustion is giving all romcoms a bad rap.  But there are so many great romantic comedies, and the genre as a whole has such potential to be winsome, charming, and fresh.  I want to see The Mindy Project live up to those standards, while still incorporating an affection for romcom into its narrative.

This begs the question: is it possible?  I think it is.  The Pilot already presented Mindy as a flawed but likeable lead, in classic romcom tradition.  Where it varies, delightfully, is in the casting of Mindy Kaling herself - Indian, not-size-2, not "the girl next door," or "the career woman" or "the sad sack" or "the lonely girl" or even "the party girl."  Mindy's just a girl.  She's not even an "Indian Girl" as most Hollywood endeavors would attempt to categorize.  (In fact, the Pilot goes out of its way to draw a line of separation between Mindy and a Muslim patient, in a pointed reminder to the audience that Hey Dum-Dums, Not All Brown People Are the Same.)

This pattern is perhaps the best course of action for The Mindy Project finding its footing as a meta-romcom romcom.  Take the standard, then do one (or all) of three things: subvert, support, and supply.  Subvert expectation by redirecting the trope into something fresh.  Support any formulaic constructs with actual relationship content and real interactions.  And supply our plucky heroine with other, non-romantic storylines.  Then, The Mindy Project not only fulfills its status as an homage to romcom, but also transcends it and becomes a new definition of the genre.  For a romcom-loving character in a romcom about romcoms, this could be genius.  And I can't wait to see it happen.
Posted by DR SHE BLOGGO at 3:55 PM