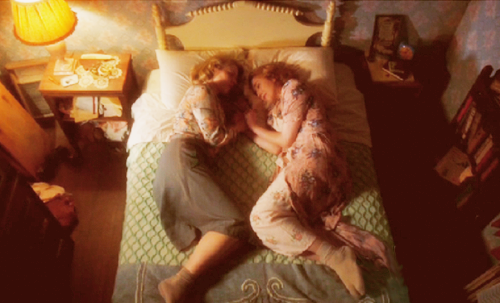 Watching Bomb Girls’ first eighteen episodes, it’s not hard to see that Betty McRae and Kate Andrews are fundamentally connected.  They share much of the same story, and the same beating heart of the narrative’s love story.  But upon closer inspection, the ways in which Betty and Kate are related back to one another, time and again, proves that these characters are forever bound, for better or for worse: more than friends, less than lovers, the exact same and the exact inverse, all at once.

You’ll notice, if you watch the Bomb Girls pilot, that the show introduces its main characters right off the bat: we see a lady amongst soldiers first, then Kate singing, then Gladys mackin’ on a dude, and then Lorna in the kitchen with a reference to her new job.  In about a minute, we know exactly what these character’s stories are going to involve: ladies in wartime, Kate struggling to use her voice, Gladys boldly navigating beyond society girl expectations, and Lorna torn between two worlds of work.  It's a lovely bit of storytelling, crystallizing whole character journeys in single moments of externalized action.

But there’s one notable exception.  Where is Betty?  We know about Kate, Gladys, and Lorna’s central conflicts almost instantly, before Betty even graces the screen.  In fact, Betty doesn’t show up until four and a half minutes in, and her introduction is simple: she steps out from behind a curtain to meet Kate.  She can’t open a door, and Betty does it for her.  Betty’s introduction, like the others', is a microcosm of her role on the show, and establishes her importance in relation to Kate.  You could even say that we only meet Betty because we've met Kate, and Kate needs help.

Here comes the big question: is that fair?  Should Betty have gotten an introduction individually, alongside Lorna, and Gladys, and Kate?  Does this mean Betty's character isn't as central to the story as the others'?  Does this mean she's just an accessory to Kate, who was previously established as a POV character?  And does it cheapen the love story, that we meet Betty through Kate?

The short answers: maybe not, possibly, no, no, and no.

There's actually a reason for Betty's introduction being the way it is.  It wasn't a careless decision.  In fact, it actually tells us everything we need to know about this relationship before we even see it take shape.  As we move forward, it's very plain to see that Betty’s not really an accessory to Kate.  We come to know her on her own, as a friend, as competition, as a worker.  Betty has her own POV in this narrative.  So the choice to introduce her as a sidecar to Kate predicates the concept that they are, in fact, inextricably connected.  Their story develops them together in a kind of entanglement that's heralded right out of the gate: one character was borne from the other, and now they struggle with that.

Their first interaction also represents another conflict in their changing relationship: Betty keeps opening doors for Kate, instead of letting Kate open them on her own, and gets mad when Kate doesn’t open the doors she wants her to.  (If you’ll forgive the slightly belabored metaphor.)  Because Betty was introduced as a savior of sorts to Kate, it sets the stage for some conflict on the idea that what Betty and Kate want for each other may not line up with each other.  Betty, despite her good intentions, falls into a group of people whose first instinct is to make decisions for Kate, without consulting her own opinion.  It’s the protective streak gone too far, the “I know what’s best for you” that’s well-meaning but rarely helpful for Kate.

So really, this is all story fodder, jettisoned with one perfectly imperfect introduction.  The fact of the matter is that Kate and Betty do stand on their own, in their own storylines - because the narrative takes care to do so.  They are allowed to be at odds with one another.  They are allowed to be friends with one another.  We come to know them separately from one another, through Gladys, and Lorna, and Leon.  But this is all beautifully complicated by the fact that not only are they connected, there’s actually a huge overlap in their individual stories and the roles they play to each other within them.  At the start of the series, both characters are running from something inescapable: Betty from her sexuality, and Kate from her troubled past.  It is impossible, no matter the faked feelings or faked papers, for either woman to avoid these truths.

What’s even more interesting is how these parallel truths interact.  The general idea is that through their friendship, each woman feels safe from harm - that fear goes away, and they can settle into themselves.  As Betty says to Kate, “When we’re finally safe, it’s okay to stop fighting.”  This safety allows for the courage to do something decidedly unsafe.  Betty and Kate, perhaps unwittingly, push each other forward into the truths they’re avoiding.  Kate’s existence in Betty’s life jump-starts her identity as a woman who likes women; Betty’s existence in Kate’s life moves her into her identity as Kate Andrews, not Marion Rowley.

So naturally, these storylines intersect.  They are each other’s sword carriers, their secret keepers.  Betty is the only one who knows about what happened in that dark alleyway with Kate’s dad; Kate is the only one who knows what happened with Betty in front of that piano.  Betty’s feelings for Kate bring her sexuality to the surface, her relationship with Kate leads her to the place where she accepts them.  Kate’s friendship with Betty keeps Kate safe in a new life, and allows her to live in love rather than fear.   Both of them feel there is something wrong with them, and both of them provide a balm for that pain, even as they're exposing the wound.

Truly, then, it's fitting that Betty’s introduction is in fact what it is.  The show doesn’t boldly declare her; it doesn’t allow us her point of view - because Betty is hiding from us.  She emerges from behind a curtain, cigarette hanging from her lips, skepticism scrawled across her face, and she retreats as quickly as she comes.  Betty McRae is not for us to know - yet.  Only with Kate are we granted access to see Betty’s true self.  And it’s a two-way street.  With Betty we are allowed to see the real Kate Andrews, who sings in clubs and takes dirty photos and works for a living.  Kate Andrews is not a church mouse; Kate Andrews is a force.

Along those lines, the dichotomy between Betty and Kate plays out in the inverse of their characteristics.  Betty presents as hard-shelled; she's tough, gruff, and a little rough.  Kate appears to be fragile, passive, and timid.  But the reality is that beneath these exteriors, the women are actually quite opposite.  Betty is actually a gooey pile of feelings; Kate’s convinced she has a hardened heart.  When they go to church together, they hear the same message.  Leon preaches: “God loves you.  […]  Whoever you are, wherever you’ve been, He’s at your side.  He sees you.  He knows you.  Accepts who you are.  All He asks is that you be true to your heart, and accept God’s grace within you.”  Betty responds to that.  Betty lets the message in, lets it through her armor, lets it take root in her loving, wounded heart.  Kate, however, walks out, and feels nothing.

The same hard/soft dichotomy can be seen in the Season 2 finale, when both women are given the same line of dialogue in the same circumstance, delivered individually.  When faced with an accusation of murder, they both utter the same thing: “You can’t prove a thing.”  Betty, her hard exterior cracking at the pressure, reveals herself to be terrified, uncertain, and vulnerable.  It’s said as a panicked defense.  Kate, however?  Kate’s is a threat.  "You can’t prove a thing."  Gone is the fragile, porcelain exterior, and what shines through is a hard heart, a steely impenetrability, and a conviction of power.  This is the real Kate Andrews, rising from the ashes of Marion Rowley’s abuse, and she defines herself as a force to fear.

So Kate and Betty are identified as inversely related, yet overlapping in identity arcs, and tethered to one another inextricably through their shared experience and friendship.  They cannot be separated, and it makes me wonder what's planned for the Bomb Girls movie and beyond.  Betty cannot fall on a sword to free Kate, because Kate will only suffer in turn.  They’re bound together, with complications and conflict, but also with love and acceptance.  Inevitably related back to one another, it’s perhaps the ultimate example of a human connection.  And while that connection may only ever present as friendship and nothing more, it’s difficult to imagine how there could be anything ‘more’ for a dynamic as nuanced, meaningful, and fundamentally indivisible as this one.