Even as Orphan Black evolves, expands, and goes full-tilt body horror, there is one central tenet of this show that will always be a joy to watch: Tatiana Maslany playing every single damn character. It’s often easy to forget, but “Human Raw Material,” in full accordance with its name, delivered a great hour to marvel at the full spectrum of clones and Tat’s ability to embody them all.

Admittedly, the main performance piece to marvel at is Krystal Goderitch, just because she’s so starkly different from the other clones - at least, at first. With her colorful lycras and furs, her done-up hair and nails, and her Valley Girl upspeak, Krystal Goderitch stands so separate from her sisters that her existence alone is part of the comedy. She’s an innocent, completely unaware of her identity, and thus has had the blissful luxury of a happy life. There’s comedy here too - Krystal lives in the same city as a half dozen of her genetic identicals, and she has no idea. She rotates into the main action without any deep understanding of what’s going on, and it’s, well, funny. She thinks she's a whistleblower for illegal stem cell testing in cosmetics, her plan goes haywire, and she ends up getting massaged by Donnie and thrown in Office Jail!  C'mon.  That's funny.

But the innocence isn’t absolute, and neither are the jokes. She knows something is happening around her; she just doesn’t know what. Hell, we first meet Krystal as she falls victim to Rudy and Seth’s violence and general disturbing-ness. So when she does swing into the narrative, ready to throw down and investigate the strange occurences in her life, it’s not just funny and adorable - it’s also badass and a little bit tragic. How awful that Krystal feels it necessary to train up to physically protect herself? How traumatic that she’s confronted with her abductor’s face? And how sad that at episode’s end, she’s whisked away back into the dark, none the wiser?

The real question, of course, is this: how long can Krystal stay Unaware? It’s effective to bring her in when she knows nothing - both dramatically, as a damsel, and comedically, as she escapes danger when it turns out she can hold her own. But the writers have done this thrice now, and I do hope Krystal eventually learns the truth and joins the fold, in some form or another. It’s strange to imagine her as part of the dynamic, yes, but that’s part of the fun of it, d’y’know what I mean?

In this episode, though, Krystal was an effective deploy in conjunction with the other “lead investigator” of the hour: Cosima, who stands opposite Krystal, as an identical who has always been aware. Cosima, the Self-Aware Clone, a scientist embracing the design of nature and honoring the humanity in science. But Cosima’s faith in science is pushed to the edge in this episode, as she witnesses the horrors behind the curtain at BrightBorn: human experiment, DNA editing, trial-and-error without consent.

Narratively, Cosima was the perfect person to meet Susan Duncan and the truth of her scientific directive. Faced with her Maker, Cosima has to deal with more than just the truth of her creation; she has to confront the manipulation of science at the cost of humanity, when she has always held them intertwined, and equally sacrosanct.  This is a violation of Cosima’s worldview, and it’s even more personal when Susan Duncan throws Cosima’s illness into the argument. By withholding Kendall Malone from Topside, Cosima is not making some noble stand on the altar of ethics: she is only signing her death sentence through inaction. 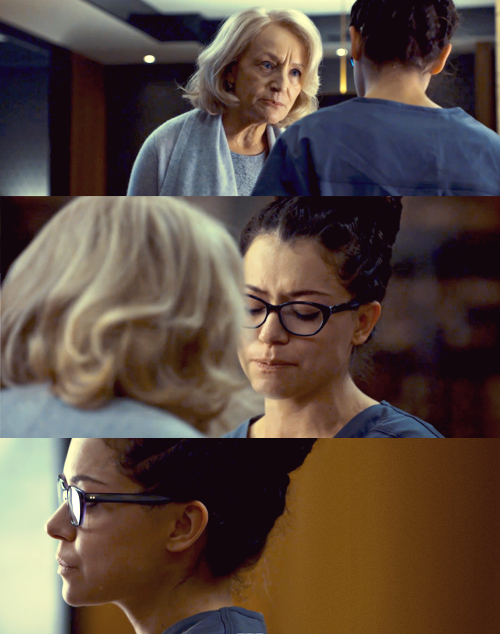 Isn’t this Orphan Black at its best? Cosima, who has easily embraced paradoxes and harmony in chaos, is put in a situation where she must make a unilateral decision: in service of her beliefs, or in service of her health. Layered over this is the inherent mistrust of the system promising results, the power imbalance between clone and maker, and the tension between clones acting for themselves versus their collective. Phew! This is some well-constructed drama here - the stuff of great conflicts, relevant themes, and tough choices - and it’s great to finally see Cosima in the thick of good story again.  Her final scene with Susan Duncan was fantastic.

Of course, it also makes one wonder when - that’s right, I said WHEN - Delphine is going to come back. I half-expected her to round a corner and bump into Cosima at the BrightBorn facility, for reasons I can’t explain. Perhaps it’s deluded hope. But given that Dr. Cormier is name-dropped in this episode, and Cosima goes asking after her in the next... c’mon. How underwhelming that it wouldn’t lead to anything, right? Right. (RIGHT!!!!!)

Backseat to this week’s action were Sarah and Alison, who already had their turn at grifting and answer-seeking in previous episodes. I continue to love the decision to rotate different clones forward into the active push of the narrative, especially to an effect as excellent as Cosima's in this episode, so Sarah and Alison did just fine in the background for me. Besides, we got an extension of their barbed bickering from last week, as Sarah lambasts Alison’s drug dealing and slight neglect of Helena, and Alison serves it right back for Sarah’s... drug dealing... and slight neglect of Helena. Sisters! Foils! Identicals! Aren’t they great.

Of course, Helena’s absence is a bit worrying, as is the possibility that Alison’s connection to Pouchy’s pills could be revealed in a shit-hitting-the-fan kind of manner. Duko clearly Knows Something, because he is a creepy-ass bastard, and his toying with Art was an excellent tension-filled scene to rebut Art’s similar mindgame from last week. The stakes are high for Art now, which brings more intrigue back to Duko, the police office, and Beth’s flashback storyline that is still dangling in the present.

Sarah, meanwhile, literally took the day off and hung out with Kira - but she’s got another kind of family drama brewing when Felix brings his biological sister to the safehouse for dinner. (Awkward family dinner? Yes, but still not as awkward as Rachel’s with Ira and Susan. AND WE DIDN’T EVEN KNOW THE HALF OF IT.) Adele’s incorporation into the plotline finally feels purposeful, and it took two little moments to make it so: the small-scale meltdown behind Sarah’s eyes when she confirmed Adele and Felix’s biological connection, and Siobhán’s terse “Welcome to the family” after Sarah leaves the room. These two little reactions reiterate the hope and fear being set up throughout the episode: Adele is great with Kira, and seems to truly care about Felix... but the service she and Felix used to connect is owned by BrightBorn, and now she knows the location of the safehouse.  Like it or not, she’s an extension of the Clone Club family - by blood, this time, and it’s not Sarah’s.

So more danger is planted, as Orphan Black wraps up its first act and pivots into escalation for the remainder of the season. We have high stakes with Art, Alison, and Sarah, mysteries with MK, Beth, Kira, and Helena, and big decisions for Rachel and Cosima. The season’s first half has done well to assemble these story elements for all its characters, and we even got Krystal Goderitch thrown in to boot! It should be a wild ride to the end.