After the darkness, comes the light. With Sarah and Cosima emerging anew from their Dark Nights of the Soul, Orphan Black delivers a little bit of hope: a new plan for the Cure, new allies with the Duncans, and a little bit of retribution in the name of family.

Of course, the darkness isn’t entirely vanquished - actually, this episode deftly mixes the two tones at key points for style, comedy, and tension. Much in the way that Donnie’s arrest was set to a cheerful (non-copyrighted, natch) birthday song last week, there were two scenes in this episode underscored by musical contrast. First, there’s the opening sequence of Donnie’s time in prison, set drearily to an upbeat rendition of “I Fought the Law (And the Law Won).” Then, of course, there’s the pinnacle of the episode, weaving Donnie’s torture with Alison’s rehearsal of “Superstar,” using the contrast to build tension and fear for the outcome.

In fact, tension was BIG in “The Redesign of Natural Objects.” There were two main questions propelling the episode, as well as the audience’s emotional trajectory through the plot. We think we know the answers to these questions, but there’s enough doubt and crafted suspense to make us nervous.  Thankfully, the result still fulfills not only our expectations, but also our hopes.

Question #1: Will Siobhán go full Irish Lady of the Darkness and avenge her mother’s murder at the hand of Martin Duko? Our initial response: probably. Look, Mrs. S. has only been peeling potatoes lately, and while she makes everything look good, a necessary part of her position on this show is the swerve on traditional motherhood. This is the primary caretaker of our main character, and she casually struts around with a thermos of tea and a shot gun. Hell, most of Season 2 directed the audience to question her motives, as it defined her as morally gray and potentially untrustworthy. 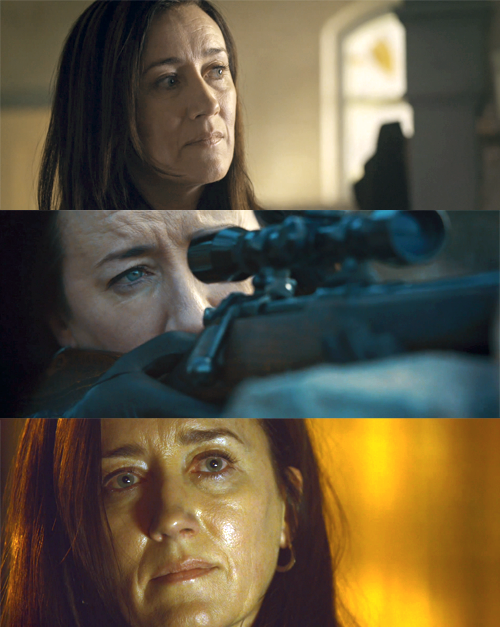 But lately? Potatoes, and sadness. So it was time for Mrs. S. to stir things up in the narrative, as we know she is capable, and what better way than to avenge her own mother’s death? And even though we were fairly certain that Siobhán was going to pull the trigger on Duko at some point, for better or for worse, the writers did a fine job extending the drama and getting the most out of a seemingly inevitable situation.

For one, it underscored the key theme of the series: family. As Duko desperately tries to earn Siobhán’s mercy at gunpoint, he tells her that he’s protecting his young niece from threats of danger. It’s about family, he says to the woman who is the true familial nucleus on this show. It’s not Sarah. It’s not Kendall. It’s Siobhán, who is sandwiched neatly in the lineage of the clones - born to the Original, custodian to the orphan in the black. Siobhán Sadler is the hub: the anchor, the caregiver, the protector, and now the avenger, to whom all of Clone Club tethers back. She is just as much Chosen as Sarah Manning, in that she was chosen for Sarah Manning.

Beyond the theme, the narrative also allows Siobhán and Sarah to demonstrate quick wit and manipulation through their counterattack - and let’s face it, these two were due for a win.  Siobhán’s desire for vengeance took her in the path of Duko, where she was able to correctly sniff out his ill intentions and take control of the situation behind the scenes. Good stuff, right?

Of course, this directly intersects with the other main question of the hour: Will Alison betray her clone sisters in favor of her husband? Duko, as anticipated, has successfully orchestrated the situation for ransom - Alison must give up the location of Sarah in order to save Donnie from getting stabbed in the brain. It’s fitting, then, that we actually hear Alison swear in this episode. No scheisse, no holy freakin’ Christmas cake. We get a proper, unfettered, and venomous "SHIT!" out of Mrs. Hendrix - and of course, it’s at church, in front of the Reverend. (More good placement by contrast.)

Like with Mrs. S., we think we know what Alison is going to do. We know that she would never betray her sisters, right? Of course! But there’s enough groundwork laid, in conjunction with a truly impossible situation, that gives enough credibility to the extended suspense of Alison’s choice. When you think about it, Alison has always been the outlier. Hell, the writers have long had difficulty bringing Alison organically into the fold, because she’s marooned in suburbia, or rehab, or a drug smuggling plotline.  It's also easy to forget that she agreed to cooperate with DYAD at the end of Season 1: where Sarah rebelliously stood on her message of “UP YOURS, PROCLONE,” Alison completely complied, and signed her family into protection by the company. Add this to the minor squabbling with Sarah that has carried through a few recent episodes, and you could almost believe that Alison would sell out her sister.

And we’d sympathize, right? The episode so clearly delineated the stakes for Donnie, and by extension, Alison - a baseline of getting beaten, and the threat of being killed. While I was at first worried that Donnie’s stint in prison would feel just as relevant as Mr. Bates’ extended time in Downton Abbey’s Department of Corrections (aka, not), we were quickly meant to feel genuine fear and alarm for Donnie’s fate through the question of Alison’s choice. How is Alison supposed to make that call, between family and family, blood and bond? So it’s a lovely dovetail back into Siobhán’s storyline that these two tension-driving questions work together to resolve themselves, and doubly rewarding that of course Alison turned to Sarah and Siobhán for a way out.  Yes, there's relief that Donnie is okay, but I would say it's an even greater relief that Alison would never turn her back on her sisters' safety.

So, finally, fear and hope land on the side of hope. We also get an added bit of optimism with Cosima’s new plan for a Cure: fertilizing a Leda egg with Castor sperm!  Ira is useful at last!  So Cosima is choppering off to Dr. Moreau’s HGTV Dream House, trading places with Rachel in an actual Clone Swap. Gotta say, Charlotte and Susan are getting the better deal in this trade. (Cosima's absence also sets up more extended drama - if Delphine is in fact recovered, she will not be in town for a heartfelt reunion.  In its stead, I humbly request a heartswelling phone call à la Penny and Desmond's in "The Constant.  Thank you and good day.)

In natural contrast to the new possibilities, there are also a few fears to lead us into the season’s final hours. First, MK is back, and she’s definitely sick (and concealing it). This was a great choice for the writers, to keep the threat of illness tangible - especially with a character like Mika, who we are not monumentally attached to, but who still has our sympathy. It’s also another established way to bring Mika in the collective, and unite her goals with Clone Club’s.  Do we think that Mika will actually tell anyone of her illness, or is the gang gonna find out in the worst way, i.e. when Mika is collapsed in front of her computer screen?

Then, of course, there’s Rachel. Last week, I talked (...a lot) about Rachel receiving The Hero’s Call, by having a vision of a swan through her robot eyeball. This week, Rachel gets walloped with an even more overt Chosen One conceit. Not only does she see the swan again, but her eye also presents her with an owlish old man I can only assume is Percival Westmoreland, the founder of Neolution, in his own time period. As mentioned last episode, Rachel is living in his former room, and her visions seems to be connecting his past with her present. Um, hello! The founder of Neolution is communicating with Rachel through digital hallucination?! If it looks like a swan, and sounds like a swan, as they (kind of) say...

So while Rachel claims she wants to restore Susan Duncan to her rightful place as Queen Neolution, it’s impossible not to wonder if Rachel is making a power play to usurp her mother (who prefers Cosima anyways) and take an increasingly less wobbly stand as the head of movement. Villainy! But we can’t discount the fact that Rachel is also standing up for a cure - while she’s a bit macabre about child-sized coffins, the fact remains that she is taking up the crusade to save her sisters, and Charlotte. So Rachel, who slides through the middle with a Hero’s Call but a Villain’s Plan, has the advantage of the gray area. She is both hope and fear, admiration and disgust, disenfranchised and empowered.

There’s also a question of the symbolism behind the severed swan head that Rachel ends up seeing. Of course, the reason it's swans is the mythological story of Leda and the Swan, wherein a woman named Leda is raped by Zeus disguised in the form of a swan. Leda then lays two eggs - one containing twins, Castor and Pollux, and one containing Helen, the kidnapping of whom causes the Trojan War. There are clearly narrative overlaps with these stories, beyond the names: the concept of Leda’s lack of consent; wars being fought over abduction of an innocent. Considering the myth, a severed swan head calls to mind the theme of vengeance, as acted out by Siobhán in this same episode, or the decapitation of an oppressive but alluring figure - perhaps a metaphor of Rachel’s future bid for the top spot of Neolution. And while she may be a villain once she’s ascended the throne, it’s currently hard to not root for her to succeed, especially in her renewed juxtaposition against Sarah.

So “The Redesign of Natural Objects” delivers some hope to balance out the fear, and propels us towards the season finale, with questions across the board. But even with optimism alive, the hour still gets the full value of its suspense and tension, achieved with some well-constructed sequences of contrast. And, too, Mrs. S. put down the potato peeler and got shit done.