Orphan Black 2.09 - "Things Which Have Never Yet Been Done"

So hey, this is the penultimate episode of Orphan Black’s second season, which means that a lot of loose ends get tied up, and new events push the storyline forward into the finale.  Alison and Donnie bury the hatchet (and the body), Cosima buys more time with Kira’s bone marrow, and Helena burns down the whole damn Prolethean complex to return to her sisters.  Most everyone is out of the woods by episodes’ end - except, of course, Kira, and by extension, Sarah.  This is the natural order of the show, echoing last season’s finale, and we hope this is going to drag everyone back into the woods - the natural order of the show.  After all, this season has marched steadily from EVERY CLONE FOR HERSELF, back towards CLONE SISTERS.

ORPHAN BLACK 2.09 - “THINGS WHICH HAVE NEVER YET BEEN DONE”

Truthfully, the two most interesting clone sisters this episode were the two that have never interacted - Rachel, and Helena.  But despite having never met face-to-face, Orphan Black actually interacts them quite a bit - thematically.  Rachel and Helena are both products of their contexts, bequeathed entitlement through their affiliations with corporation and religion, respectfully.  They stand on opposite sides of Sarah, given inverse relationships with control and chaos, but the same relationship with power.  They dye their hair blonde to differentiate themselves, to assert their own identity - which is ironic, considering that their identity is not derived from themselves, but through their alliances.  They feel power because of their belonging - to DYAD, to the Proletheans - and the narrative of Orphan Black has been slowly tugging the rug that these two stand on.  As an audience, we watch them reorient themselves, and wait for the big yank. 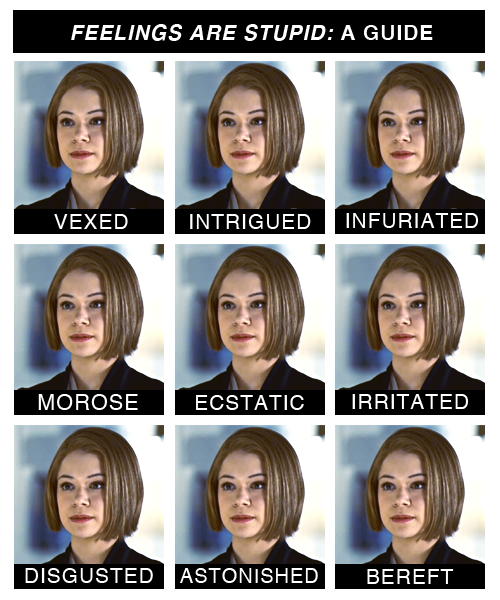 “Things Which Have Never Yet Been Done” puts Helena and Rachel forward in the narrative, and through this, lets them demonstrate their similarities and differences.  The episode does this mainly by letting us watch their relationship with a) their institution, and b) children.  We witness Helena begin her willing reintroduction to life with the Proletheans, an off-shoot of the context she was raised in, and we are shown Rachel completely ensconced in DYAD.  And within those respective walls, we see Helena interact with a child not too different from herself, and we see Rachel interact with Kira, and the opportunity to raise Kira through DYAD.  Basically: both women are faced with children that might echo the life she herself lived, raised in the snug empowerment of a stringent affiliation.

But in their reactions to the same basic stimulus, the differences between Helena and Rachel are illuminated, in the synthesis of chaos and control - we see the ability for these characters to change.  Helena connects with Faith (an ironically-named little girl) because Faith echoes to Helena her own self.  They zero in on each other, equally fascinated.  And when Faith is chastised by Alexis much like Helena was chastised by a nun in Ukraine, Helena protects Faith.  She steps between Faith and the life Helena got, and acts as an agent of change.  It’s echoed again with Grace - Helena puts herself between Gracie and the life her father’s forcing her into, and protects her from it.  And it ends with the ultimate change agent: fire.  Helena levels the whole compound, wildly burning it to ash for a better rebirth.

But where Helena destroys pain by fire, Rachel preserves it in ice.  In the throes of her original context, Rachel has a similar opportunity as Helena.  She’s kidnapped Kira to harvest a cure, yet she still puts her up in a pretty bedroom that’s decorated very carefully to be a home for a little girl.  She sits with Kira, waits for her to wake, and greets her warmly.  (Or as warmly as Rachel greets anyone.  Kira probably still felt a chill cascade over her.)  And the icing on the cake: she tells Kira, “You may even grow to like it here, just as I did.”  Here Rachel is, facing a child who might walk down the same path she did, and she says, “YEAH I KNOW IT SUCKED TOO BUT I LEARNED TO LIKE IT AND SO WILL YOU.”

So where Helena is an agent of protection, Rachel is an agent of perpetuation.  Helena, who was tortured, brainwashed, and caged, is capable of change.  Change is chaotic, and Helena thrives there.  Rachel, however, is not capable of change, because it can’t be controlled.  It is predicated on letting go, and Rachel is fundamentally incapable - and unwilling.  All season long, I’ve been waiting for some crack in Rachel’s exterior - to watch the hard shell split away and let all of Rachel’s issues come roaring out.  And yet, when this happened, it still felt dissatisfying to me.  Rachel reset right back to zero and pretended she didn’t just have a screaming fit where she broke things and threw plants.

It’s frustrating, and yet at the same time, this episode provided the saddest justification for that: unlike Helena, maybe Rachel is not capable of change.  And what else would make that difference but her sisters?  Helena can be an agent of change because she herself was changed - by Sarah.  She jailbreaks out of Prolethean Land because she belongs somewhere else, with her sestra.  She is no longer trapped by her context, because someone gave her a new place to belong.  Rachel doesn’t have that.  Not unlike Dr. Frankenstein’s creation (thanks for the thematic assist, Henry), Rachel is a monster because (cheese alert) she wasn’t shown love.

Or wasn’t she?  That somewhat thin conclusion doesn’t stop there, because Orphan Black has developed something deeper and more complicated for Rachel.  We have actual home videos that indicate Rachel was shown love in her life.  Not only have we seen these home videos, but Rachel traps herself with them.  She locks herself in a glass room with a martini and watches her own happiness, and tells herself it was all a lie.  Rachel was shown love, but she rejects that it could be real.  Helena may have tortured herself with a blade, but Rachel tortures herself with memories, and feelings she won’t allow herself to feel.  So like the home videos she watches, she’s stuck in a loop of self-torment until she implodes.  Then, she carefully reconstructs her facade, and the whole process is nothing short of fascinating and horrific.

I used to wonder how Helena could ever survive in this narrative.  How could she truly live in this world, all teeth and violence and remorse?  But Orphan Black has successfully resurrected the character for Season 2, and given her a believable chance at change and belonging.  Now, I find myself wondering if Rachel can survive this narrative.  “Things Which Have Never Yet Been Done” shows that she is similarly-derived as Helena, but suffers fundamental differences in how she moves through her own life, and what she allows herself to feel and do.  Can the writers feasibly keep her as a villain, in a time loop of tragedy and outburst?  Can they develop her, and let her change?  Or is Rachel the Javert to Sarah’s Valjean, doomed to pursue her endlessly, until she decides to step over the edge of her ivory tower?