Orphan Black 2.10 - "By Means Which Have Never Yet Been Tried"

ORPHAN BLACK 2.10 - “By Means Which Have Never Yet Been Tried”

It makes sense, in a show that is constantly shifting the ground on which the characters stand, that a season finale reorients everything. “By Means Which Have Never Yet Been Tried” fulfills that disorder, picking up the show and setting it back down in a new landscape, calling both its characters and its audience to reevaluate what we think we know and challenging us to hold on as we tumble further through the looking glass.

The finale is also full of choices for its characters, which for any story inherently engenders an intriguing narrative pull, but of course, this is Orphan Black. This show has been very calculated in who is shown to have decisions.   Decisions are power, after all, and the power on this show has been squarely in the hands of patriarchal organizations - corporations like DYAD, religious groups like the Proletheans, government organizations like the military.

In positioning its female leads opposite these oppressive agencies, Orphan Black has delineated a clear feminist message, giving screentime and visibility to women whose power, personhood, and access to choice are all under threat. The point of the show has been to point the camera at women under watch, under knife, under pressure - and watch them struggle to make decisions denied to them.

But “By Means Which Have Never Yet Been Tried” finds us in a brave new world. We are on shifted ground, because suddenly we realize that the familiar bastions of power have fallen away. Gone is Leekie, gone is Henry, gone are Tomas and Daniel and Olivier and even the concept of oppressive monitors.

What’s left are the playmakers, and the playmakers? Are all ladies. We have Sarah, Cosima, Rachel, Mrs. S, and Marian Fucking Bowles, each taking decisive action in the finale, grabbing a toehold and making choices that spin the world in new directions. Not only this, but the men in the narrative exist basically as extensions to these decisions. Cal returns, not to kick down any doors, but to offer up his hacker knowledge on the altar of Mrs. S.’s badass direction. He and Paul both act as liaision between Mrs. S. and Marian Bowles, twin beefcakes serving secondary to juxtaposed warrior mom-babes. Art and Felix take a backseat so they can help Sarah handle Helena’s return. Ethan Duncan and Scott give their time and knowledge to Cosima’s service and Sarah’s aid, and Jesse exists simply as a fair prince for our heroine to quest to.

In short: the menfolk carry out the intentions of the take-charge ladies and don’t utter a peep of protest. And not only that, but their roles are defined by passivity and communication, things that are traditionally prescribed to narratively-sidelined females. Cal and Paul trade in information, peacekeeping, and negotiation; Art and Felix basically babysit; Ethan and Scott simply facilitiate. And Jesse’s in a goddamned tower waiting for true love’s kiss. These are the definitions of female-bound narrative function, and in the Orphan Black universe, they are purposefully doled out to the gentlemen without question or argument.

So the topic of gender on this show spins anew, at a slightly different angle. The remnants of the patriarchies we knew are being run by Rachel Duncan and Marian Bowles, and the surviving members of the Proletheans are Gracie and Mark. Finally, for the moment, the women are running the narrative as well as the show - is that permanent? Does this twist in nurture change the fundamental nature of this show? And, beyond that, how is the big reveal going to work?

Because yes, it’s even more interesting, then, that this same episode introduces the concept of Project Castor. Turns out that there’s not just the batch of female clones, the group of Tatiana Maslanies running ‘round, but there’s also a batch of male clones. They are property of the military, and for one brief millisecond, everyone’s blood ran cold at the possibility of more Pauls. But it’s a small army of Ari Millens, and regardless of the actor, it blows this universe wide open. 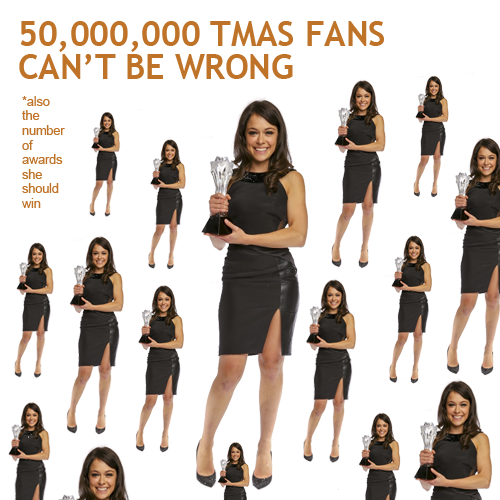 Ground shifted again, and Orphan Black challenges us to stay in the spiral. And that’s the question - is the audience willing to follow a herd of Ari Millens in the same way we have the pack of Tatiana Maslanies? Will we care about Castor as we’ve cared about Leda? Will characters like Alison and Art remain relevant as the universe tilts anew? And will it fundamentally change the show if we extend the narrative of cloning to men, considering the effort made to illuminate the power imbalances of gender, the claims made on women’s bodies, and the concerted fight for agency in a world that denies it?

Obviously, I have no answer for these questions. The fact remains, though, that this is, at the very least, interesting. Men harvested by the military is, after all, another facet of feminism, the prescription of strength and aggression sacrificed to emotionally-detached hegemony. Using women’s bodies as vessels for reproduction is not a far cry from using men’s bodies to serve state-appropriated violence. Masculinity and femininity are two sides of the same coin, and they remain interrelated, no matter the “men’s right’s activists” trying to divorce them. These concepts prescribe limiting standards based on preconceived values of behavior, and taken to this conclusion, deprive the participants of identity, agency, and individuality.  Sound familiar?

In shouldering Project Castor, Orphan Black is reshaping and reiterating their conversation about nature, nurture, gender, identity, and order - especially as an extension of systems vs. the individual. The military is the least-explored of the systems that Orphan Black has introduced, so it seems like a natural - and potent - progression of focus. Provided that the show continues with its modus operandi (and all their Latin episode titles), I’m guessing that the chaos of life and deviation will tear through the rigid demands and shape something new, much like Sarah, and Cosima, and Tony, and Helena, and the entirety of Project Leda. The thematic concept embodied in these women doesn’t just vanish with a batch of boy clones.

So, that’s the season, eh? The world we’d learned in Season 1 continually expanded throughout these ten episodes, and blew wide open at the end. Because of this, I’d say that Season 2 wasn’t quite as tightly paced as Season 1, and the writing was burdened with the challenge of including everyone in the multiplying narrative threads. It was no small feat, and overall, I think it was successful. But moving forward, with a new sprawl of concepts, I’m definitely curious about how both the characters and pace will balance with it. April can’t come fast enough.