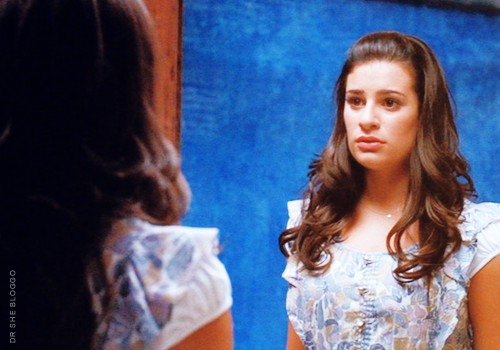 RACHEL, SELF, AND OTHERS
We’ve established previously that the purpose of Rachel’s arc is to move her out of isolation and embed her genuinely in a group that appreciates her for herself and not just her singing voice.  But the inherent friction in that arc is that Rachel must negotiate, as a character, between herself, and others.  What does society expect for Rachel and her behavior?  What does Mr. Schuester and the Glee Club?  How does Rachel’s natural drive and ambition interact with external forces?

It’s perhaps this aspect of Rachel Berry’s existence that is the most fascinating and problematic to explore.  How far into social acceptance and popularity can the writers push Rachel before she starts to lose her identity?  Much of what alienates Rachel from her peers contributes to why she’s such a remarkable character, and if she strays too far from herself to please others and gain friendships, does she lose a part of what makes her great?

It is because of this that there are so many shots of Rachel staring at herself in a mirror.  Yes, the character is a bit self-absorbed, and she does look at herself singing into her hairbrush in “Showmance,” “Mash-Up,” and “Silly Love Songs.”  But all in all, the repeated use of mirror shots is a way for this isolated character to study herself, and question her own identity in comparison to others.  She stares herself down in “Mattress,” speaking about how other people will only disappoint her high expectations.  She studies her reflection in “The Power of Madonna,” wondering if she’s ready to lose her virginity to Jesse St. James because he wants her to.  She eyes herself in the mirror in “Hairography,” subjecting herself to Kurt’s makeover because she wants to make herself desirable to Finn.  She cries in the bathroom mirrors, in “The Rhodes Not Taken” and in “Ballad,” as she confronts truths about herself delivered by women who are cautionary tales, representations of what Rachel could become after years of low self-esteem and wasted talent.

Rachel Berry looks at herself in the mirror not to see how great her reflection is, but to look at who she truly is and negotiate the external forces affecting her sense of self - for better or for worse.  Every big decision she makes on the show speaks to the idea that Rachel must determine which choices are good for her character growth, and which choices will take away from her personality in favor of others’ approval.  This deals additionally to the dichotomy of Rachel being selfish and yet also selfless.  What can she give to others without taking away from herself?

Season 2 for Rachel Berry has spoken heavily to the issue of her identity.  After the character issues in “Audition,” Rachel was relegated primarily to mopey storylines with Finn, firstly in the issues of their relationship and then in the aftermath of their breakup.  Fingers pointed all season long at the notion that the real Rachel Berry was gone from our screens, the spark and gumption of Season 1 Rachel buried under a lot of emotional dependence and low self-worth.  But it begs the question: was this an error in writing, or an intended effect of her relationship with Finn and the negative feedback from Mr. Schuester and her peers?

It’s difficult to say, especially considering that the idea that Rachel needed to have a “comeback” was written into the show.  Either the writers realized they goofed, or it was intentional that Rachel was a bit adrift in her characterization.  Either way, I’m not sure I agree with the decision to move Rachel away from her usual behavior.  Doing so without consequence implies that Rachel is losing herself in pursuit of being a part of something special - or worse, in pursuit of being in a relationship, and that sends the wrong message entirely.

Furthermore, Rachel’s manifestation of a comeback, in “Comeback,” was in a way that had nothing to do with Rachel’s original appeal anyways - when was Rachel ever a trendsetter?  Rachel as a character should not “come back” in the form of a fashion trend, and the idea that Rachel believed that she should disconnected us from empathizing with her, and just made us feel terrible when the result was that Brittany could set a trend with Rachel’s clothes, but Rachel couldn’t.  The message in that was that there’s nothing’s wrong with Rachel’s clothes - it’s Rachel that’s the problem, and that’s heartbreaking.

No, instead of Rachel trying to set trends with her wardrobe, we need to see her embracing the qualities that made her unique and beloved when we first met her, and patiently wait for others to do the same.  Rachel Berry deserves to be valued as a person, and she absolutely should not change who she is in order to achieve that.

That being said, the struggle to stay true to herself and conform to others’ standards should play out in Rachel’s existence.  She should be negotiating the differences between herself and others, and what she’s willing to compromise - that makes her an interesting character, keeping her relatable, and helping to ground her as self-aware despite her ambition.  But, as with many things in Rachel’s character, there is a delicate balance that the writers must find in order for the execution to be successful.

PART ONE: RACHEL AS A MAIN CHARACTER
PART TWO: RACHEL, THE GLEE CLUB, AND BELONGING
PART THREE: RACHEL, LIKEABILITY, AND DICHOTOMY
PART FOUR: RACHEL IN LOVE
PART FIVE: RACHEL, SHELBY, AND THE CONCEPT OF FAMILY
PART SIX: RACHEL, SELF, AND OTHERS
PART SEVEN: RACHEL, HER DREAMS, AND HER FUTURE
Posted by DR SHE BLOGGO at 8:40 PM