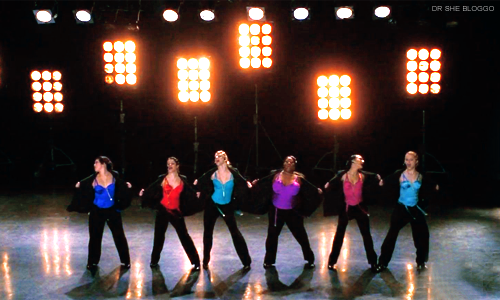 WRAP-UP
While Glee’s inconsistencies preclude any exacting generalizations that define every single interaction, it’s clear through pattern and frequency that the show’s portrayal of gender dynamics is indeed damaging and inhibitive, especially in terms of the female characters.

Through the decisions the writers make for these characters, a discernible imbalance can be identified, wherein the female characters are often wielded as objects to the male subjects. They are also frequently deprived of the writer-given ability to make a choice in the narrative, hindering their representation as developed characters.  They are often relegated to the background if there’s not boy drama to partake in.  Their relationships with other females are characterized primarily by hostility, and female friendships are either abandoned or unmanifested in storyline - even when there’s real opportunity for development.  Furthermore, girls who achieve power in the narrative are villainized, and therefore, their flaws are more likely to be manifested in storyline, where they are punished for them - by both the male characters as well as the other females.  And finally, females who have sex are also villainized - but, girls who don’t have sex are frigid and prudish.

In all, the females on this show are frequently seen marginalized, stereotyped, or placed in accessory to the male characters, who are more likely to be given choices, independent storylines, and their own points of view in the narrative.

For a show that goes to great lengths to alleviate the toxicity of homophobia as a     byproduct of traditional masculinity - and even redefine what masculinity means for modern teenagers - it actually pays little attention to femininity, and lets misogyny linger.  So were it not only just a damaging portrayal of women, there’s also the bitter hint of hypocrisy lingering over the choices the showrunners have made.

The good news, in all of this, is that a new season is about to begin, and Glee has hired six new writers to round out their staff.  Two of these six new writers are women, and although that’s not a surefire sign of betterment, it bodes well for more equal representation when there actually are women represented on staff.  Even regardless of gender, these writers are six new opportunities to re-evaluate the presentation of gender dynamics on the show.  They are six new opportunities to adjust the representation towards something less inhibitive and stereotypical, shifting away from misogyny in particular and towards something more positive, inclusive, and balanced.

So, I want to thank you all for reading this rather massive exploration, and I hope you found something in it for you to chew on.  This series has been a huge undertaking for me to work on, and I truly appreciate all the feedback to it - both positive response, and constructive criticism.  I haven’t been able to respond to all the comments, but I do read them and value them.  If you left me a question about something here, chances are I will respond to it in full in a larger post, because some of the questions you guys have left are thought-provoking, and worth discussing!  Until then - thanks very much for reading!