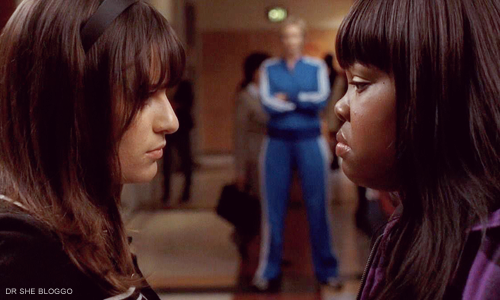 FEMALE RELATIONSHIPS
Really, the most damning thing about the way women on Glee are portrayed is the clear and notable absence of positive female relationships.  It’s rare on this show that any two characters can interact without the involvement of dating or hating - but with the women in particular, healthy interactions are few and far between.

Firstly, female friendships are largely unexplored - existing or otherwise.  This is not a good start.  And technically, many of these “friendships” shuffle into the asinine (and only female-defined, it seems) description of “frenemies” - which is even worse.  Santana and Mercedes, Santana and Quinn, Rachel and Quinn, and even Rachel and Mercedes could fall into this category.   Straight-up friendships are much harder to find in the narrative.  Tina and Mercedes are supposed to be best friends, and yet they hardly interact independent of the group - they can barely get a storyline individually, let alone together.

Santana and Brittany were originally best friends, and still are; however, the main interest of their dynamic has been rerouted into romance, which, while certainly acceptable, is still slightly different, and comes with its own separate set of angst.  Supposedly, Tina helped Santana write “Trouty Mouth,” but we never saw it.  Brittany and Tina appear to be friends through Artie and Mike, transcending the potential bitchiness a love triangle could bring, yet it’s never manifested past conversation.

The Mercedes-Rachel relationship, on the whole, has transitioned from competition and antagonism into actual friendship, as early as “Sectionals.”  Similarly, Mercedes has struck a healthy dynamic with Quinn, as they supported one another in both “Home” and “Funk.” (I will say, however, that in the latter episode, Mercedes and Quinn were designed to relate to one another through drawing a parallel between the ostracization felt from teen pregnancy, and the ostracization felt from society’s inherent racism... an inadvisable comparison, perhaps.)  Since then, it has been completely dropped.

The problems with these relationships is that they are inconsistent - and invisible.  Female relationships in the foreground are hallmarked by hostility and bitchiness, as inevitably, they are fighting or sabotaging one another - usually over a boy.

Rachel and Mercedes are really the best the show has going for them, and that's not great.  They didn’t make any progress from Sectionals until Season 2, when Kurt’s friendship with Rachel involved Rachel being friends with Mercedes as well.  And then the show continued to threaten their friendship with competition - in both “Comeback,” and “A Night of Neglect,” the two girls found themselves at odds.  In "Comeback" particularly, it was a third bitchy female - Sue Sylvester - who pitted them against each other.  Mercedes and Rachel's friendship was completely forgotten about until the last second in both episodes, when the conflict just dissolved without any real developed resolution.  It’s poor storytelling all around - rinse, and repeat.

There are several examples of female dynamics that are almost good.  Rachel and Quinn’s relationship is notably and frustratingly hallmarked with the dichotomy between atrociously bad and remarkably good.  They are either failing the Bechdel test miserably, stuck in opposition over Finn, or they’re actually having quiet moments of breakthrough where they seem to understand one another beyond any other character on the show.  But these moments usually occur only after they seem to cross a line - they reach a peaceful mutual understanding only after Rachel rats Quinn out in “Sectionals,” or after Quinn slaps Rachel across the face in “Prom Queen.”  What’s worse, the positive repercussions of these moments never seem to stick.  Rachel wiped Quinn’s tears away at prom, and the next episode, called her a “vindictive harpy” as Quinn aimed to sabotage Rachel’s happiness… again.  Why is this necessary?  It suggests that Rachel and Quinn can’t rise above pettiness associated with sharing a love interest, which completely flattens their characterization and washes away their development.  Their point of view in the narrative is therefore trivialized for the perspective of the male they share in common - Finn Hudson.  This is awful. 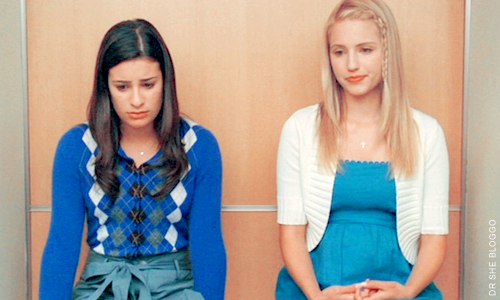 But even without the presence of Finn, the writers are missing the mark on Rachel and Quinn’s dynamic.  “Born This Way” rightfully set up Rachel and Quinn as being completely dissimilar yet oddly alike - with a duet that spoke to the idea of feeling confident yet completely insecure, and a plotline that connected them by portraying Quinn as an alternate-universe Rachel Berry.  The episode suggested the parallel even stylistically - all of “I Feel Pretty/Unpretty” was directed, shot, and edited to construct heartbreaking similarities between the two characters.  And yet, they never actually had a conversation about it.  The writing didn’t support it at all, and Quinn and Rachel’s emotional resolution had nothing to do with one another, even though it should have.  Quinn’s came from Finn, her boyfriend, in validation, and Rachel’s came from a conglomeration of Puck and Kurt - both dudes.  Sigh.

Sadly, this is not unprecedented for Quinn’s lady interactions.  Quinn hardly has any healthy dynamics with the other females on the show.  Her relationship with Mercedes has completely faded away, and she rarely interacts with Brittany or Tina.  She had a solid moment of mutual respect with Lauren in “Born This Way;” however, this only came on the heels of their vicious competition for prom queen, wherein Lauren blackmailed Quinn and sabotaged her campaign.  And then they never interacted again.

Similarly, Quinn and Santana shared an excellent moment in “New York,” with Brittany, as Quinn had a minor meltdown and the writers allowed her once-sycophants to be supportive of her, finally, in friendship.  Excellent!  But… in terms of Brittany, Quinn has hardly interacted with her except to protest Brittany's decimation from being shot out of a cannon.  I guess we can muster up some friendship when the death of that person is on the line, right?  And with Santana, rewind twenty-two episodes, and Quinn was betraying Santana’s trust and Santana was slapping Quinn across the face.  Episodes in between saw them hardly interacting, with random bitchy insults slung from both sides.  And if Quinn and Santana’s renewed friendship isn’t going to stick anyways, it diminishes the impact of the events, without a doubt.

Truthfully, the majority of female-female interaction on this show are horribly misaligned.  It all starts, on a larger scale, with the Cheerios, who receive absolutely no screentime as participants in a primarily female extracurricular.  Because Sue Sylvester is Head Villain, the Cheerios are portrayed simply as bitches and backstabbers (ladies with power = villains) and any development given to the cheerleading characters comes when they are off the squad.  (Quinn’s pregnancy and I-just-want-someone-to-love-me woes?  Off the squad.  Santana dealing with her sexuality?  Off the squad.  Brittany handling her best friend’s struggles?  Off the squad.)

Hand-in-hand with that notion is the idea that the other girls, the cheerleaders in particular, treat Rachel like crap.  This starts on the most basic level of constant insults to Rachel’s face, as well as behind her back - even Mercedes and Tina have been verbally derisive towards Rachel.  But the hostility towards Rachel is also manifested in storyline.  “Comeback,” for example, puts forth a Brittany-Rachel dynamic which could have been well-executed; however, it painted a scenario where the other Glee girls joined together in accidental opposition to Rachel, and resulted in Brittany telling Rachel she was annoying.  Rachel’s emotional resolution was delivered to her via Finn, simply through dialogue - poor writing.

In “The Power of the Madonna,” Rachel goes to the other girls in earnest to ask for boy advice (don’t get me started on the fact that her question is “How do I stop a guy from getting mad at me for saying no [to sex]?”).  She is met with revulsion from Santana, Quinn, and Brittany, and Mercedes is portrayed as unable to relate.  Only Tina seems to be in a position of sympathy to Rachel, but she doesn’t actually offer any advice, nor does her storyline interact with Rachel’s in any way.

Group girl interactions, of the non-singing variety, are usually a mixed bag of hostility.  Rachel calls a “football girlfriends” meeting in “Furt,” so that the girls, rather than do anything themselves to stand up for Kurt, can beseech their athletic boyfriends to use violence as a means of defense.  Which, in and of itself, is a frustrating manifestation of damaging gender roles.  Rachel even specifically uses the phrase “We’re all lucky enough to have boyfriends on the football team.”  And when Santana tries to be a part of the meeting, she’s snapped at for the nature of her relationship with Puck, and ostracized.  Not only that, but Tina asks Brittany if she’s dating Artie, her ex, and Brittany simply replies with a “deal with it,” and it’s dropped.  In effect, the girls all got together… to talk about the boys, and how the boys can solve a problem.  It’s pretty shallow.

In general, there are few alliances between female characters, and there are several nasty associations with this.  Firstly, there is the problem that there’s plenty of examples of positive male dynamics.  The concept of the “bro” is alive and well on Glee - and even though there have been several instances of male characters fighting over a girl (Finn and Jesse, Finn and Puck, Will and Carl) there are still more male bonding dynamics on the show than male antagonistic dynamics.  Sam and Finn are allowed to be friends (even while Finn was out for Sam’s football position, and even after Finn “stole” Sam’s girlfriend).  Puck and Artie bonded, in both “Never Been Kissed” and “Prom Queen.”  Puck and Finn were actually given a scene where they re-establish their broken friendship, even after Puck made out with two of Finn’s girlfriends.  Mike and Artie are apparently good friends, even despite the fact that Tina dumped Artie for Mike, and Mike is extremely talented at dancing, Artie’s near-impossible dream.

There’s another gender divide at work here as well.  The lack of alliance between female characters is often a result of scheming and manipulation - the girls, especially Santana, Quinn, and Rachel, are often portrayed as backstabbers, and friendships are not built because the girls are seen as untrustworthy.  The guys generally aren’t, and the underlying suggestion is that the boys are too dumb to scheme.  The girls are smart, but only to achieve their bitchy agendas, like solo-winning, boyfriend-stealing, or relationship-ruining.  The boys are just plain dumb, which is an insulting manifestation of “masculinity” as well.  The only young male characters who are not portrayed consistently as dim are Kurt, who is gay, Artie, who’s in a wheelchair, and Mike, who hardly ever speaks.  This does not reflect well on any count.

Ultimately, it’s an easy fix to write female characters as friendly and accepting - the Glee writers are just choosing not to.  Lazy conflict is almost always created from negative female interaction, and so it’s a go-to staple for high school drama.  In that the girls are largely isolated from one another in the narrative, they are therefore relegated into harmful stereotypes for the purpose of a plot device - often making them complete accessories to the male subject.  This is unfortunate, because I’d venture to say that if there were simply stronger female dynamics on the show, it’d be easier to overlook many of the other issues afflicting gender representation - largely because many of these issues would probably also be alleviated as a result.