PEOPLE OF EARTH, I AM UPSET.  This episode left three of our clones in immediate physical peril.  You know it’s bad when Cosima’s looming-death disease is actually the least of our worries (for right now, anyways). 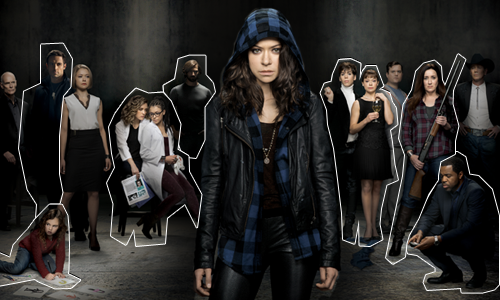 One thing I absolutely adored about Season 1 of Orphan Black was the ways in which the narrative threw the clones together, and created unexpected alliances between these humans who, in an ideal world, would rather not have to confront the fact that they’re a science experiment.  The coming together of Clone Club was a major thread of Season 1, and it happened largely as a matter of shared goals: protect Kira, protect themselves.  The unity extended even further than the clones - to Mrs. S, Felix, Art, Delphine, and Paul.

In Season 2, however, the story is spiraling the clones and their allies away from each other, and onto their own paths.  It’s no longer CLONES ASSEMBLE, it’s Every Clone for Herself - and “Mingling Its Own Nature With It” displayed that in full force.  Sarah sought assistance outside the clone group, Mrs. S. is nowhere to be seen, Felix left Sarah’s side, and Alison and Cosima struggled to express solidarity with one another.  The support system just isn’t there for any of our clones anymore - Sarah, Cosima, Alison, Helena - and it’s no surprise, then, that the end of the episode finds each of them in pretty dire situations, at the fingertips of the enemy.

So this is the story of Season 2, and it fundamentally makes things dark, and even a little dissatisfying.  Because of course, as an audience, we WANT to see the clone sisters protect one another, and the fact of the matter is that the narrative has them on their own journeys right now.  What makes this an even more interesting choice is the importance the show places on individual vs. group as a larger theme.  I’ve mentioned in the past that Orphan Black deals thematically with collectives enacting ideals as a form of system, and the repercussions that has on its singular components.  On a show about clones, it’s a huge question: what does it mean to be one of a kind?  What does it mean to belong to a family?  How is that family defined? Is it DNA, or is it shared beliefs?  And what strength or power goes along with that?  For me, that theme is endless fascinating, and I’d love for Season 2 to explore splintering the clones through that filter.

The main “group” of “Mingling Its Own Nature With It” was the New Order Proletheans, led by Henrik and family. Henrik intends on incorporating Helena into his family, which is 10,000 levels of disturbing and PLEASE DON’T, because it manifested in him “marrying” Helena and carrying her off to their wedding bed.  Not only this, but Helena was clearly not in her right mind for any kind of consent, and with no other clone nearby to help her, Helena is powerless against her captors.  She is but a vessel for their wishes, to impregnate her, and they're willing to defend this stance through justification of a higher being.  It's painfully horrific to watch, and I sincerely hope that Art - since he's the closest nearby - can help Helena out of this situation, if she's unable to help herself.

The most interesting Prolethean scene, for the purpose of thematic exploration, came with Henrik talking to Grace about Helena belonging in their family. Grace had doubts, and Henrik immediately equated doubt with fear, and a lack of faith. The concept of uncertainty is pervasive in this show. At its core, it’s a mystery thriller.  Not knowing is what propels the drama, and for the characters within the narrative, it's also something to fear, especially when it’s about your own biology.  Not knowing is a thing to conquer, for both Science and Religion, OB’s two main philosophical pillars.  It boils down to this: what do you believe?  Do you believe in data, or God?  Do you believe in someone who says they love you?  Do you believe you’re safe, or do you believe you have two monitors?  Who can you trust, and in what can you truly have faith - if anything at all?  This is another way in which the clones are made different from the groups acting against them: their faith - in science, or God, or whatever they hold fixed - is burned, or at least shaken.

Along these lines, Cosima and Delphine had one of the more interesting narrative threads, in that it blended hope and fear with belonging, in a kind of horrific funhouse mirror. Delphine reveals to Cosima that there was another clone, Jennifer Fitzsimmons, who suffered the same respiratory disease that killed Katja Obinger, and that plagues Cosima currently.  Not only that, but she was contacted by DYAD, made video diaries, and ultimately… died three days ago.  This was a huge thing to confront Cosima with.  She watched Jennifer’s videos as a form of research, but what she’s really looking at is herself, and what she’s really facing is her demise.   Jennifer is a spectral version of Cosima’s future.  Jennifer is a warning of what’s to come, of what Cosima might be powerless to stop.

And like Cosima, Jennifer too, had a monitor. “Sometimes I forget you’re mine,” she tells Delphine, as she realizes.  Because what is Cosima supposed to put her faith in, when she’s staring down the barrel of a deadly disease with her name on it?  Science?  Her lover?  She rather bitterly equates the monitor relationship as being promised fake hope, which Delphine promptly defends.  Until this point, Cosima is the clone that's kept the most faith, against all odds.  She has chosen to comply with her circumstances, to live in the lion’s cage as long as she can keep her surroundings - but this exchange with Delphine reveals that maybe Cosima isn’t entirely happy with that.  Then again, what choice does she have?  She’s basically dying.

Truthfully, I wish we’d seen more of these two.  The idea that Cosima and Delphine dissected Jennifer’s body is so horrifically heartbreaking, and fits their tension so well.  How do you negotiate science and humanity?  Is it reasonable to have faith in Delphine?  Is this body just a body, or is it a projection of myself?  And is it okay that Jennifer Fitzsimmons didn’t know the whole story of her relationship, her biology, her identity?  Oh, there was so much in this new clone’s presence, and how it extended into Cosima and Delphine’s core conflict.  Cosima’s struggles in particular this episode were really affecting, and I wish she’d gotten more screentime.

Auntie Alison is also having a rough go of it, as the only other clone on the homestead, as it were.  She makes a desperate call to Cosima about possibly having a second monitor (snooping Angie) and Cosima doesn’t really have time for her. I  love the idea that the two clones left in conjunction are the two clones with the biggest disconnect - echoing the theme of the season.

As for Alison, the pressure of performing is bearing down on her, both onstage and off.  She knows Donnie is her monitor, and the guilt of having let Aynsley die roars up with abandon.  She has Angie on her back now, and Alison is just paranoid enough to fully understand that she is not a coincidental new acquaintance.  Plus, to cope with all this, the pills and alcohol are back.  So Alison literally takes a fall - offstage, in front of everyone.  I am so beyond glad that Felix is in that theater to help pick her up.

Of course, Felix is in fact in that theater because he chose Alison over Sarah, in a way.  Or at least, Felix knows that his role in Clone Club is one of support, and he doesn’t have that place with Sarah at the moment.  Not when Sarah takes him and Kira straight to Kira’s dad, without consulting Felix or even telling him the plan.  Jordan Gavaris was absolutely heartbreaking when he tells Sarah he doesn’t have a place with her anymore.   Feeling like he’s bumped from her family, from her circle of trust, is overwhelmingly sad, and palpable.  So he goes where he’s needed - to a rapidly-crumbling Alison.

Sarah’s actions in “Mingling Its Own Nature With It” are worth discussion - especially since Orphan Black put a lot of effort into making Cal’s presence a reveal. I do think that this resulted in having to remove Sarah as the POV character in the beginning of that storyline, so we wouldn’t cotton on to her choosing to go to Cal’s instead of randomly finding a house to stay in.  Because of this, we kind of got a kaleidoscope of Sarahs.  We were treated to Mom Sarah in several scenes with Kira.   We had on-the-run Sarah, as we’re used to seeing her, and then Cal’s Sarah, who’s basically a duplicitous grifter. There's also a Sarah who clearly cares about Cal.  At the end of the day, Sarah is who she needs to be in order to survive, and we saw that in full force in this episode, even as she tries to do the right thing by her daughter and her own moral code.

Obviously, Cal’s inclusion in the show is a big deal, and one I wasn’t exactly prepared for in the third episode of Season 2. I’m still in “wait and see” mode on Cal, and his introduction as it fits into the larger design of the season.  It’s probably fundamentally valuable to the show’s narrative to keep threatening Sarah and Kira with separation, and the idea that Kira winds up in Cal’s care for awhile is interesting.  And of course, Sarah, Cal, and Kira make up a traditional “family” as the show hasn’t quite presented yet.  Whether or not it’s the ideal is left up for debate, but Sarah obviously feels a lot of pain from not having a proper mother and father in her life.  Creating a mother, father, daughter unit with these three is another element in the show’s exploration of family, alliance, and belonging.  So as long as it continues to connect with this concept, it’s definitely worth the show’s while, and I’m along for the ride.

But really, the most pressing concern is the fact that SARAH, HELENA, ALISON, AND COSIMA ARE IN LIFE-THREATENING SITUATIONS RIGHT NOW.  Breaking up the Clone Club is so not good for my blood pressure.