I did a very smart thing this week: I watched this episode twice, and I put on closed captioning.  Now I have everyone’s names right, and also I’m not completely in the dark on Carlton’s marble-mouthed dialogue!  So, with more information under my belt, let’s discuss.

Last week, I talked about the story of the season being one of separation, as each clone and ally is pushed out on her own journey and left to fend for herself against persecution by oppressor.  This week, “Governed As It Were By Chance” intersected several characters on their paths - a fitting expression of the episode title.  After all, three of our clones were left in danger last week, and surely required assistance in escaping from it.  But there was one main intersection I'm interested in: the reunion of Helena with Sarah.

Orphan Black is particularly good at connecting and disconnecting characters from each other, and Helena with Sarah is perhaps the best example.  While Helena came into the narrative as a villain, she felt a connection to Sarah, which was ultimately attributed to the fact that they shared a womb.  In season 2, the connection has gotten deeper, with the reveal that the sisters are actually mirrors of each other.  It’s an apt embodiment of the characters’ dynamic, as the writers have written Sarah and Helena to be at odds yet completely intertwined.  They’re two sides of the same coin, yet they share so much in common.  They are not light and dark individually, but rather they both have light and dark within them.  Watching that kind of complicated interaction will never not be rewarding.

And Orphan Black knows this, as “Governed As It Were By Chance” was clearly designed to reunite the two with a big emotional payoff.  Both characters found themselves completely isolated in the narrative, with new “families” surrounding them - Sarah with Cal and Kira, Helena with the Proletheans.  And while Helena managed to save herself (with a handy assist by Art; more on that later) - the writers specifically chose for Helena to be reunited with Sarah by saving her from torture.  (Clearly, because there are some plausibility holes in Helena finding her way back to the city from that farm, and getting past Rachel’s locked door.  But the payoff is worth these quibbles.)

There are many things wonderful about the shower scene.  Even just as a standalone scene, it’s phenomenal in its construction.  Here’s Sarah, completely vulnerable and terrified.  She can’t kick through the bathroom wall this time - she’s tethered, and bound.  Even her silver tongue can’t get her out of the scenario, and she knows it.  The palpable panic and fear building in Sarah only compounds when she sees her presumed-dead sister covered in blood and holding a knife.  And it’s on purpose, so that when Helena hugs Sarah, there’s a designed choice for Sarah to let it all go and willingly sob in the arms of someone who keeps coming back to her.  “We make a family,” Helena has reminded us again and again, and the fact that Sarah shooting her couldn’t even destroy that only means that the feeling is more powerful.  The narrative doesn’t exactly refute Helena when she says, “We were meant to be together.”  They are, after all, twins and mirrors.

This is part of what makes the shower scene powerful, on a larger scale.  Helena steps in and saves Sarah, because Sarah is her religion now.  On a show where faith is questioned and doubts are daily, Helena can be trusted on one absolute: her family.  Not unlike Sarah herself, Helena has one driving force, and it’s the concept of family.  She is no longer a disciple of god, but of her twin, the piece of her that she felt was missing.  Of course, Helena’s definition gets a little twisted along the way, as so far it only extends to Sarah and Kira and all other humans could just as easily be stabbed.  This is what makes Helena a wonderfully complicated and dangerous character.  But at the core, Helena and Sarah remain twins and mirrors, in so many ways.  Sarah shot Helena, and yet Helena saves Sarah’s life.  Because Sarah is family, and that’s an unbreakable bond. 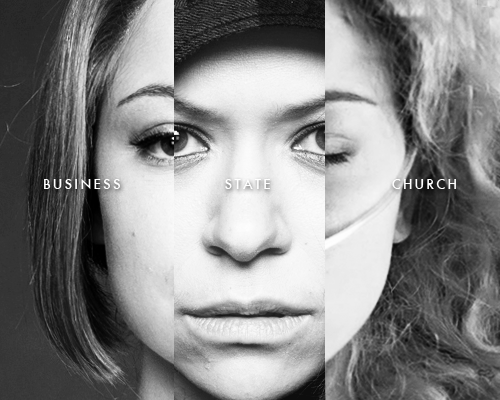 The Sarah-Helena dynamic expanded further in “Governed As It Were By Chance,” as the show created another meaningful clone connection - this time, between the twins and Rachel Duncan.  Before now, Rachel-Sarah connections have popped up here and there, in a similar (although smaller) fashion to Sarah-Helena.  Rachel, all buttoned-up and business-like, acts in contrast to Sarah, who represents life and survival and messy humanity.  They challenge each other’s existences, simply by being who they are and who they’re associated with.  But not only that, this episode revealed that the Duncans, Rachel’s adoptive parents, were originally meant to have Sarah and Helena as their children, before Amelia spooked and hid them from DYAD.  Leaving the Duncans, of course, with Rachel instead.

The idea that Sarah and Helena were almost-Duncans, but for the choices of one woman alone, is compelling in how it officially connects the characters to Rachel.  The three exist almost on a spectrum now - on one side of Sarah there’s Rachel, who’s quelled all her human urges, and on the other, Helena, who’s practically feral.  Sarah’s the balance of these extremes, designed to be challenged by her interactions with the poles.  It’s no coincidence, then, that Sarah’s rescue by Helena happens not just anywhere, but in Rachel Duncan’s posh empty hotel room.  Helena, Sarah, and Rachel are connected, powerfully but tenuously, through “almost” - a missed connection that somehow means far more than it reasonably should.

But the connection becomes most meaningful when you consider where all three “sisters” ended up: because of Amelia, Helena went to the church and Sarah to the state; because of Amelia, Rachel went to the corporation.  All three were assimilated not into families like Alison or Cosima but into groups, into systems, and the relationship between individual and system is one that Orphan Black loves to explore.  Because of this choice, OB is mobilizing Sarah, Helena, and Rachel into the three most important clone pillars this season, as the mystery unravels.  They are thematically representative, narratively connected, and poised for conflict.  More so than the others, they act not only of their individual will but also as a result of their contextual upbringing.

Of course, “Governed As It Were By Chance” revealed that Rachel Duncan’s behavior doesn’t quite align with her personal history, as Sarah witnesses her happy memories recorded on VHS.  There’s no evidence of a hardened and clinical narcissist, but rather of a happy child at the center of warm family affection.  Rachel Duncan lived the happy childhood neither Sarah nor Helena had, and yet here she is, repressing all humanity and exhibiting the psychology of someone with no emotional attachments.  What happened to Rachel that caused this change?  It’s a great mystery for OB to set up, and I can’t see how anyone wouldn’t be fascinated by at least the question, if not the answer.  Well done, show.

All of this thought about Helena and Rachel’s parts in “Governed As It Were By Chance” led me to the concept of agency.  Orphan Black regularly addresses empowerment and personal agency as one of its core themes, especially as it extends to the conflict between one vs. many.  Helena and Rachel, both raised by groups, have behaved with more entitlement than other characters; empowered by the association with science and religion.  With Helena, it’s been clear for awhile that her participation in her empowering group is actually hindering her agency, and more so than ever with her current storyline with the Proletheans.  Agency is a huge (missing) part of her marriage to Henrik, as he harvested her eggs without any consent whatsoever.  Helena only realizes what has been perpetrated against her through traumatic sense memory, which OB displays in full acknowledgement of horror.  The visual of an unconscious woman having her legs spread is universally stomach-turning, and OB didn’t shy away from using that image to communicate how not okay it is, what happened to Helena.

Looking at Rachel, we haven’t seen any evidence of a lack of agency.  In fact, in previous episodes, it’s demonstrated that Rachel is actually at a high station in the company.  She ranks higher than even Leekie, who was heretofore presumed by the audience to be Head Honcho of DYAD.  But “Governed As It Were By Chance” revealed that Rachel may not be different from the other clones in one aspect of powerlessness.  Like Alison, and Cosima, and Beth - Rachel has a monitor.  Or at least, it’s suggested, through Sarah’s assumption and the phone call Daniel makes to Leekie.  If it’s true, it begs the question: does Rachel know that Daniel’s her monitor?  Is she complicit with it, like Cosima, or is she being lied to?

To me, it’s far more fascinating if it’s the latter, because it removes Rachel from her position of power and makes her just like our merry clone club.  It means that her affiliation with DYAD only goes so far, and that in the eyes of the company, she will be treated no differently than Sarah or Helena, when it comes down to it.  Like Helena, Rachel is being lied to, and the position that’s creating their sense of entitlement over the other clones isn’t real; she’s no better, no worse.  (Like with Helena, will it be Sarah to burst this bubble?)  Combine this with the news that Rachel’s corporate-clone sense of entitlement is masquerading a once-happy childhood, and Rachel Duncan easily becomes the most fascinating fixture on the show.

The possibility of Daniel being Rachel’s monitor is doubly intriguing (and disturbing) under the lens of agency, when you consider what Sarah pointed out - Daniel is sleeping with Rachel, so he must be her monitor, yeah?  If the insinuation is true, Daniel falls in line behind Paul, Donnie, and Delphine as monitors who have a sexual intimacy with their subjects.  And if it’s a purposeful deployment, the question of consent is raised again - because if sexual partners are the best candidates for monitors, it suggests that the reason is because monitors are granted access to their subjects’ bodies in a way that others aren’t.  The idea that consensual sex is being conflated with nonconsensual access to biology is pretty horrific, because it means the monitors have more power over their lovers’ bodies than they do.  We haven’t seen enough of Daniel yet to have an example, but last season Paul allowed for secret nighttime testing on Sarah-as-Beth, this season, Delphine gave Cosima’s blood samples over to DYAD without permission, and this episode, Donnie basically blackmailed Alison into staying in rehab.  The power dynamic in the monitor-clone relationship is fascinating, twisted, and troubling.

More stuff happened, but the bulk of my interest in the episode came with the reunion of Helena and Sarah, the new information about Rachel, and the themes of agency and connection.  Everything else, for the sake of brevity, can be listed in the…