Bam boom!  Orphan Black is finally greasing the wheels and getting this season MOVING.  "Ipsa Scientia Potestas Est" got back on track with breakneck pace - and along with some great storytelling and narrative devices, created a pretty gripping hour of television.

There are several reasons "Ipsa Scientia Potestas Est" works so well - but mainly, they all stem from the fact that it allows its characters to MOVE and DO.  The first episodes of this season found Alison trapped, Helena trapped, Cosima trapped, and Sarah hiding.  The show, by nature, limits the choices these characters have - but when their hands are bound completely, it can sometimes make for a less dynamic narrative thread.  At some point Sarah’s gotta kick through the bathroom wall.  So, "Ipsa Scientia Potestas Est" freed up Helena and Sarah, dialed up Rachel, created communication between Leekie and Cosima, and, since she’s immobile in rehab, wisely left Alison out of the picture.  (More on this down below.)

In other words, this episode allowed for characters to make and act on their choices, thereby knocking down dominoes into other characters who in turn make and act on their own choices.  Plot forward, characters changing and adapting.  This kind of scenario is when Orphan Black is firing on all cylinders, and "Ipsa Scientia Potestas Est" didn’t disappoint.  But as we all know, I’m rarely focused on plot.  Nah, I’m here for the characters.  Let’s discuss.

Last week, the show did a wonderful job setting up Rachel, Helena, and Sarah as the three central figures of the season, inherently interesting because of their complicated connections and thematic representations.  It became clear that the writers were intending to compare and contrast Rachel and Helena with regards to Sarah - with their shared elitist views endowed to them by their group-based context, and the ways in which they challenge Sarah.

This episode followed through on this similarity, even going so far as to put the words right in Felix’s mouth: “You’re now pitted between two psychopaths!”  Sarah found herself trying to keep her feet in the crossfire of Rachel and Helena firing up their actions.  Helena doesn’t stay caged at Art’s long; instead she gets a sniper rifle and goes to take out Rachel.  Rachel doesn’t mourn Daniel’s death long; instead she manipulates Paul, frames Felix for murder, and shuts down Cosima’s treatment in order to force Sarah’s surrender.  Rachel raises the stakes, Helena creates an obstacle, and the drama for Sarah is elevated.  These ladies don’t mess around, and the show is better for it.

But regardless of episode construction, I keep going back to the title of the hour: “Ipsa Scientia Potestas Est.”  In Latin, it means “knowledge itself is power.”  And this episode of Orphan Black presented a whole smorgasbord of material touching on knowledge, power, and the inherent consequence of lacking either: vulnerability.  It’s a core function of the show’s themes, with a rather drama-rich result for its characters.  After all, vulnerability - or a lack thereof - is a cornerstone of most human interaction.  And we saw it all over this episode.  How does each character handle being vulnerable?  Do they seek power for themselves, or over others?  Who chooses vulnerability, and who resists it?

The relationship between knowledge, vulnerability, and power crops up with pretty much everyone in the hour.  Rachel refuses to be vulnerable with Paul, and therefore seeks power over him sexually.  Sarah chooses to be vulnerable with Helena, and in turn receives compliance with her wishes.  Delphine discovers that DYAD is exerting power over Cosima by denying her access to “the science.”  Leekie chooses to amend this, despite the possibility of being vulnerable as a result, and in return receives information from Sarah.  Rachel keeps secrets from Leekie in an effort to disenfranchise him, because she doesn’t trust him to make the right decisions.  Cosima keeps the truth of her illness from Sarah to avoid seeming vulnerable, or pitied.

Let’s talk Rachel for a moment, since she’s the character with the most pronounced relationship to vulnerability, power, and knowledge.  Thus far, Rachel has stood in a glass tower, staring out the window with all the knowledge, all the power, and no vulnerability.  She has designed it that way.  Rachel is so embedded in her own rigidly-defined power structure that she bends no rules for no one.  Her sex with Paul almost plays as compulsory, as though she’s obligated to have sex with her monitor, simply because it’s how the power structure at DYAD works.  Rachel doesn’t appear to have any emotions clouding her relationship with power, because that’s the best way to keep it.  It’s exactly what her criticism is of Leekie.  And even though she was sleeping with Daniel, she insists on seeing his bloodied corpse.  She refuses to be treated with consideration to her feelings, because obliging is an admission of having them - and being vulnerable.

But the show does something interesting with Rachel and vulnerability, during the sex scene with Paul.  Here, Rachel is in complete control.  She instructs Paul what to do when, and slaps him when he move towards her without permission.  This situation is designed to be physically intimate without being emotionally intimate, and still Rachel is vulnerable - because Helena has a sniper rifle leveled at her across the street.  There’s a wonderfully tense dichotomy going on here.  The writing and direction allow the audience the dramatic irony of knowing Rachel’s vulnerability, while simultaneously witnessing a situation where she’s actively denying anything less than absolute power.  And to make that situation a sex scene, where some level of vulnerability is implied, is even more telling.

It’s also an expression of Rachel’s big flaw: nothing is absolute.  Life is chaos, not controlled.  She can manipulate situations to her will using power and knowledge, but vulnerability can’t be kept out forever.  Sometimes another version of you is pointing a sniper rifle at your face and you’re none the wiser.

What’s even more interesting is the show’s definition of science in comparison with Rachel’s outlook.  It’d be easy to conflate science with control.  But Cosima, the show’s bastion of science, is expressive, adaptable, and full of life.  Rachel, however, is science through corporate: an inflexible pillar of controlled data and measured outcomes.  She’s doomed to fail.  Messy humanity - embodied by Cosima, Sarah, and Helena (messy, messier, messiest) - will overtake her.  Her glass tower will shatter, and fall.

So of course, it makes sense that the person on the other end of that sniper rifle is the one person who threatens Rachel’s power in the messiest way possible.  Cosima is confrontational of Rachel.  Sarah is even more confrontational of Rachel.  But Helena?  Helena is the most confrontational.  She is not controlled science; she is controlled religion.  She is as fragile and destructive as Rachel, but unlike Rachel, she’s completely chaotic.  She may kill in the way Rachel would likely kill - from a distance, with a clean bullet through the head - but Helena goes and plays in the blood.  She’s untamed where Rachel is repressed, and that’s the biggest threat of all to Rachel’s repression.  (I hope they meet soon.)

What’s notable too about the sex/sniper scene is the way in which OB uses the tension of intimacy and power to tell the story.  It serves almost as a dramatic device, ramping up the suspense.  Then I realized that the episode does something similar in two other places - first, with Felix and Colin, and second, with Cosima and Delphine.  In the case of Felix and Colin, sex and intimacy is used to underpin Felix’s complete vulnerability when the situation changes, and Paul bursts in with a gun.  The tone changes on a dime, and Felix goes from playful and confident to terrified and dominated.  He doesn’t know what’s happening, and he has no control over it.  It’s a jarring switch of vulnerability, power, and knowledge.

The other example belongs to Cosima and Delphine.  When Cosima finally receives her treatment from Delphine (thanks to Dr. Leekie) the scene plays very plainly like a sex scene.  But not a sex scene like Rachel and Paul’s, or Colin and Felix’s - because it’s not actually sex.  Unlike the other two relationships, Cosima and Delphine’s is basically defined by emotional intimacy.  Delphine kisses her cheek, whispering “mon amour,” and the whole thing is shot in in a series of extreme close-ups, all backlit with narrow depths of field.  It’s a complete embracing of intimacy - and vulnerability, by admission.

The show goes out of its way to have Cosima and Delphine talk about how they don’t know what’s going to happen - but they’re okay with that.  Which of course begs the question: is there power in vulnerability?  Usually a denial of knowledge means a denial of power, and the victim of that is forced to be vulnerable.  This is how Rachel views the world.  But when you’re in a loving relationship with your monitor, what else do you have but vulnerability and trust?  The monitor dynamic is inherently a power imbalance, yet Cosima surges forward, completely vulnerable, and mostly okay with that.  To choose to be vulnerable, as Cosima has done with Delphine and DYAD - is there power in that?

I’m inclined to say yes, considering what "Ipsa Scientia Potestas Est" designed for not only Cosima, but for Helena and Sarah as well.  With Helena threatening to kill Rachel, and with Felix’s safety on the line, Sarah was at the mercy of other people’s power - Helena, and Rachel’s.  But in order to stop Helena from pulling the trigger, Sarah chose complete vulnerability - not just physically, but emotionally.  She steps in front of the gun, puts herself in physical danger, and tearfully confesses to Helena that she isn’t just using her.  Sarah shows emotional vulnerability, and Helena puts the gun down.  Like with Delphine and Cosima, there’s power in intimacy, and emotional honesty.

Considering how each of the clones were deployed in this episode - and taking into account Alison, who specifically wasn’t - there’s a very interesting spectrum going on with them, in terms of how the show has designed their traits and how they’re embedded in the narrative.  It’s almost as if they can be plotted with consideration to two extremes: vulnerability and power, and control and chaos. 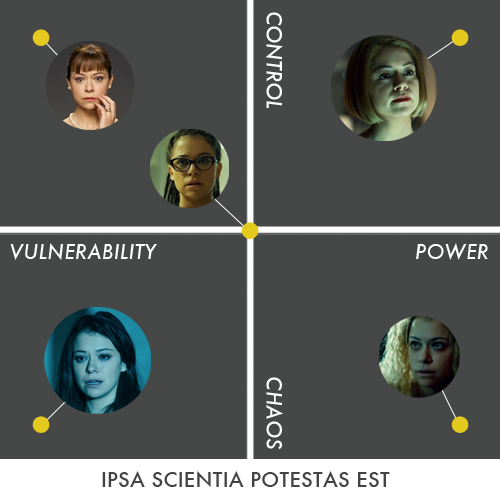 Of course, there's a lot of room for interpretation and debate with this graphic, as characters shift in different situations and episodes.  It's not an exact science here.  But there's a lot of interesting things to mine from this perspective - the two clones that thrive in chaos are the two in the black, ungoverned and still pursued by DYAD.  Looking at Sarah and Alison in positions of vulnerability also illuminates a syllogism of the Orphan Black universe: vulnerability equates humanity, equates motherhood - and Sarah and Alison are the two clone mama bears.  Helena and Rachel both operate in power, because they were raised by systems which instilled in them a kind of twisted sense of entitled empowerment.  Diagonally across the graph are pure challenging foils, and adjacent are complicated expressions of similarity and difference (and still challenging in their own way).

So, denying vulnerability, coughing up knowledge, and shifting power means that the plot has accelerated for next week, as more shit hits the fan and Mrs. S. comes back to tantalize us with Lady of Mystery intrigue.  But even beyond plot, "Ipsa Scientia Potestas Est" gave us rich character moments carved out in vulnerability and intimacy.  Another excellent exploration as applied to theme, character, and the confluence of the two.