With Orphan Black’s flashback premiere throwing forward to Sarah Manning at episode’s end, there was no telling whether the ensuing episodes would devote any more time to Beth’s last case and her final days. Connecting characters were set up to cross into present-day - MK, the cheek cutters, and Detective Duko - so theoretically “The Collapse of Nature” could be the only hour in the past, as we push forward with Sarah on the run.

But “Transgressive Border Crossing” does indeed return to a modified flashback format, as we truly spend more time “back at the beginning of all this shit.”

The success of “Transgressive Border Crossing” lies in the fact that it isn’t just flashback, but rather a synthesized connection between past and present. The two timelines are merging, as MK bridges the gap between Beth and Sarah, and Art and Sarah uncover new mysteries through Beth’s surveillance.

Here’s what we learn: Beth has an encounter with Detective Duko at her apartment, where they both speak with dangerous candor from under thinly-veiled poker face. It seems clear that he knows Beth’s identity as a Leda Clone, given his reaction to her suggesting that the story of her life is at the end of her investigation. So, when Beth later puts a blond wig on her head and a gun in her purse, it’s difficult to avoid any conclusion that doesn’t involve her killing Duko. After all, as Art says, Beth can’t let anything go.

But when she returns with blood on her hands, she tells MK they’re done, and she needs to drop the investigation. Stubborn-as-hell Beth, backing off? It only seems logical that Beth found something out during this encounter, especially when you add the fact that we all expect that she killed Duko. Maybe she didn’t even kill Duko; maybe he’ll show up in present-day, in the Sarah storyline, or Rachel’s. Regardless: there has to be something else.

Whatever it is, it also has to be enough to push Beth completely over the edge, as we realize in her last scene with MK that she is wearing the burgundy dress and tightly-wound bun of our first encounter, on the train tracks. The slow recognition of that outfit, followed by the immediate understanding - and dread - of what was coming was phenomenally executed, and capped beautifully with MK’s vulnerable pleading for Beth to stay. There are few more heartbreaking sentences in the English language than “Please don’t leave me; I need you” - and even fewer when they’re not heeded, to tragic result.

Embedded in MK’s present-day conversation with Sarah, this section of the episode finally humanized MK into a fully-fledged character and Leda Clone to Care About. Between the close-ups on her face as she talks to Sarah in the laundromat, and the way she talked to Beth the last time she saw her, MK is now officialy initiated into Clone Club empathy. Not only that, but her dynamic with Beth called to mind another sisterly relationship on the show: that of Helena, with Sarah. 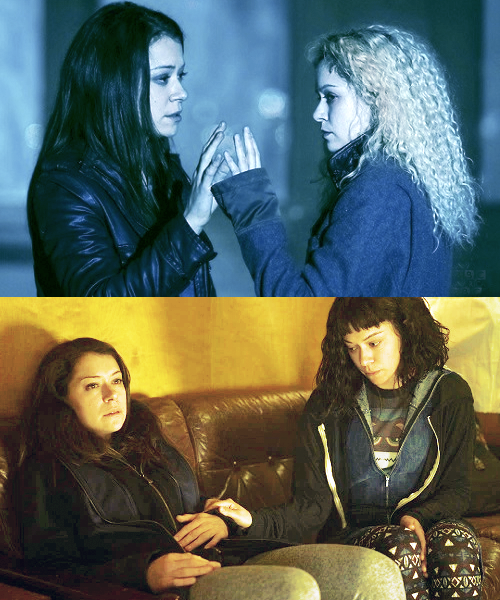 Sure, Beth and MK were not mirror-twins in utero, à la Meathead and Sestra, but the way they interact has shades of similarity. Beth and Sarah both occupy protective Older Sister role, while MK and Helena are both childlike and emotionally stunted, behaving lovingly towards the sisters who treat them with respect. This echo is yet another element of loss in Beth’s suicide, and I hope the writers spend time allowing MK to open up to Sarah in Beth's place. Given that Sarah immediately echoed Beth’s choice to call MK Mika, sensing that it meant something to her, this path seems likely, and should be rewarding.

Of course, Helena’s going to be tracking down Sarah, to share the important news that she is having twin babies with her boyfriend-husband Donnie Hendrix. Helena’s stories have recently skewed towards comedic, so it was nice to see the emotional turn this one eventually took, rewarding Helena’s relationships with Sarah, motherhood, and weirdly enough, Donnie himself.

It’s these last two that might stir up trouble, though, as Helena inadvertently disrupts Alison’s household, patience, and emotional landscape. I find it interesting that the show chose to show Alison struggling with uncomfortable feelings of jealousy towards her sister(s) that can have children. On the one hand, it’s totally understandable, especially for someone like Alison who doesn’t cope well with dashed expectations and perceived failure of self. At the same time, I wish the scene had been written differently, in a way that reminds the audience that Alison does have kids. She and Donnie have always been portrayed as the suburban mom-and-dad archetypes, and we forget too easily that they are actually parents.

Orphan Black’s writers have perhaps painted themselves into a corner on this issue, crossing their messages inadvertently through plot points. This has been, since the beginning, a show about found family. Sure, the family mostly comprises genetic identicals, but there’s an element of reward in that these separated sisters did, in fact, have to find each other. More than that, this nucleus has amassed a group of people unrelated by blood who serve - choose to serve - wholly and completely as mothers, daughters, brothers, sons, sisters, and in-laws. We don’t have to look far to see that in this episode, with Mrs. S. serving as Cosima’s shoulder-to-cry-on and stand-in mom.

But also… last season’s reveal about Kendall Malone and Siobhán pulled a Once Upon a Time, and now everyone’s a blood relative in a tangled-up genetic lineage. The writers even shine a light on that in this episode, as Felix feels like he’s an outsider and reveals that he’s been searching for his own birth family. And in the same hour, Alison’s kids go unmentioned and unshown as she expresses pain over not being able to have children.  This coincidence of events paints a portrait, however unintentional, that there's more validity and value in raising children by birth, and identifying families by blood.

Ultimately, Felix and Alison’s character motivations are completely understandable, but I do wish the narrative provided the validation that adopted children are, in fact, and irrevocably, enough for the families they are adopted into - especially for Alison’s kids, who are not white, and seldom talked about. Now that we’re on a show with an encompassing bloodline, found family narratives require extra reinforcement, especially when it’s been a core construct from Day 1.

“Transgressive Border Crossing” did mention another now-missing member of the Clone Club’s extended family: Delphine Cormier, who was last seen by the audience in a parking garage. Oh yeah - and mysteriously shot. In-universe, Cosima is suspended in uncertainty, knowing nothing except that Delphine disappeared. While the showrunners have intimated that Delphine is in fact dead (complete with some tone-deaf commentary), I am holding out hope. Because, frankly, if she’s dead, this is not great storytelling. Let’s lay it out: