You guys.  I don't think anything could stop me from blogging about America's Next Top Model this cycle.  Nothing - not even if Andre Leon Talley strangled me with a sequined warlock cloak.  I'd find some way to blog from the beyond, hoping that the CW broadcasts in the netherworld.
You see, it's the All-Star Cycle.  Meaning, Tyra's bringing back former contestants to compete one more time for the honor of being America's. Next. Top. Model.  I won't lie; at first I thought, "Yes!  This is great way to bring back my genuine favorites, like Joanie, and Mercedes, and April, and Nik!"  But then Tyra released the contestant list.
And it's so much better.
The models returning to ANTM are, predictably, girls who didn't win and are game for having a second go of it for one reason or another - either the prizes, or a chance to be on reality TV again, or maybe they just really missed hanging out with Mr. Jay.  Regardless - these broads are all a little bit kooky and I cannot wait to see what insanity they bring over the course of the cycle.  Let's peruse their pictures, shall we?
ALEXANDRIA (C16) 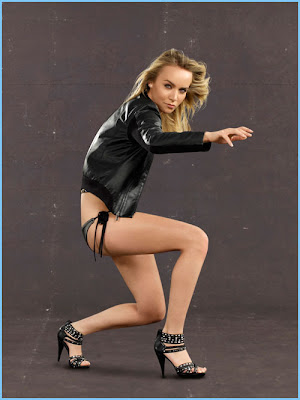 Oh, Alexandria.  Back so soon?  Somehow Alexandria got the Bitch Edit of her cycle, which honestly I felt was a bit unfair.  To me, she didn't seem to have an aura of malevolence so much as a slight dearth in self-awareness, which frankly makes her the perfect reality show contestant!  She takes good pictures, gives daffy sound bites, and raps in confessional - all in complete seriousness.  In short, Alexandria is perfect for ANTM.  Look at that crazy tiger pose, no pants and everything!  I can't wait for more. 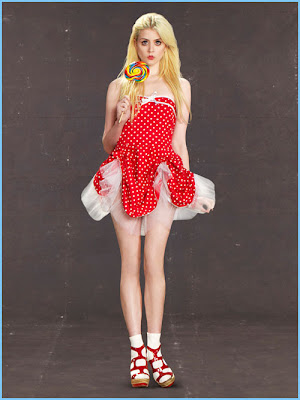 I get the feeling, personally, that Allison is one of the less zany contestants this year... and Allison is obsessed with nosebleeds and kept her weave in a candy jar.  So, this is telling information!  Actually, I think Allison will do well (again) this time around, and I'm looking forward to what kind of portfolio she'll crank out.  And I wonder if she'll get a new makeover?  It'd be interesting if she had a different hair color.
ANGELEA (C14) 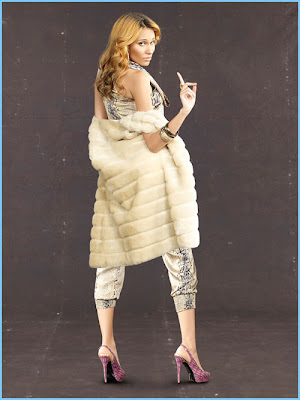 Where do I even begin with Angelea?  I mean, you can tell from the photo that this lady has sass.  You can also tell from the photo that maybe that's not the best way to place your fur jacket.  But hey, I noticed the clothes, so maybe Angelea's got it right when it comes to modeling.  In any case, I can't decide if Angelea will make me laugh or make me cringe.  Hopefully it'll be a little of both. 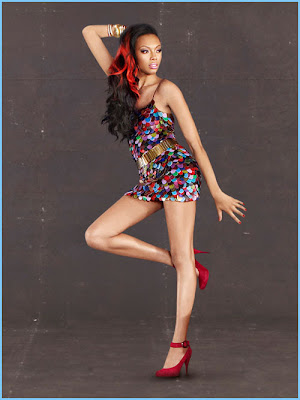 I hope, so very much, that Bianca tells someone this cycle to "check [her] thighs in the mirra" because I'm pretty sure my life would be made.  I will also accept her "and I'm DONE" at every exit from the room.  In all honesty, I find Bianca's "bitchiness" delightful and I think she's a really good model - she keeps popping up in the Project Runway finales!  Of course, she did have that smackdown with Nikki Blonsky in a Caribbean airport, but... we just won't talk about that. 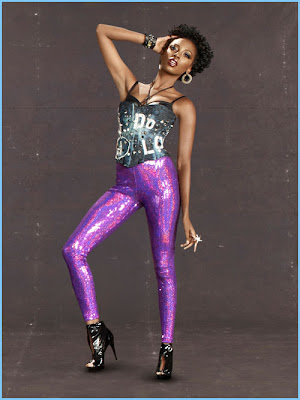 Bre!  I loved Bre.  Her attitude manifested in the most hilarious of ways, until it actually got kind of serious when she flipped her shit over some granola bars.  But I don't hold that against her.  I love her look, and honestly I was surprised to see her come back to ANTM because I see her on shampoo commercials almost every time I have the TV on.  But maybe she just wanted to hang out with fellow "woman of class" (hee!) Lisa D'Amato again. 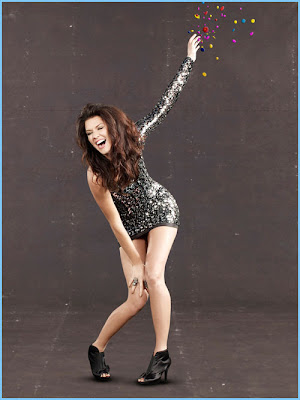 Through the history of Top Model, there have been many Brittanys.  This is the Brittany I will remember most, with her crazy Janice Dickinson looks and almost-as-crazy-as-Janice-Dickinson personality.  Remember that time she screamed at the other girls to shut up in the car?  Fantastic!  Actually, Brittany was one of the show's few masters of that weird sexy-but-innocent look, and she had a pretty solid portfolio.  I'm looking forward to seeing what she brings to the table this time around. 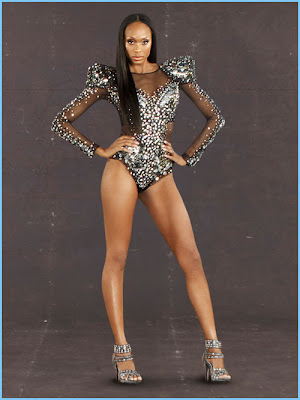 Camille?!  Is that really you?!  I am ecstatic Camille is coming back.  The original bitch?  The girl who coined the phrase "signature walk," because she really was that self-assured in her kickass-but-criticized runway skills?  Oh, honey.  Welcome home.  Although, I do wonder - Camille's 33.  Does she really stand a chance of winning this thing?  I'm not sure I care.  I just want her back to coin more phrases - she'd do much better than "smize" and "modeling H-to-T."  And clearly she's already suited for Tyra's space-aged, pantsless wardrobe!  Gasp!  Maybe she's planning a hostile takeover. 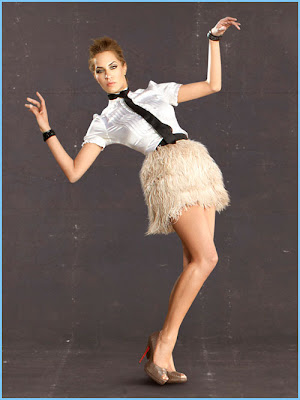 Dominiiiiiiique.  Poor Dominique was saddled with the Bitch Edit as well, which was kind of unfortunate because she seemed like a sweetheart in her post-show interviews.  I think she's just a little daffy, which makes me like her all the more.  Anyone who triumphantly shouts "Brasilia!" and sometimes looks like a drag queen is A+ in my book.  I mean, look how well she's rocking the masculine-meets-feminine look in that tie-meets-feathered skirt combo!  There is not an ounce of sarcasm in my voice when I say she is werkin' it.
ISIS (C11) 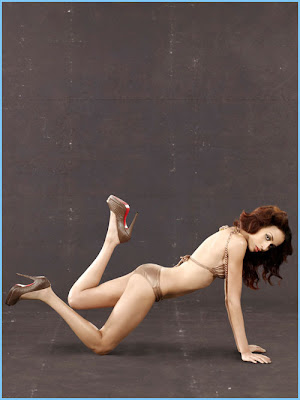 For those not in the know, Isis was Top Model's first (and only, thus far) transgendered contestant.  At the time of her original participation, she was pre-op, but taking hormone injections - and despite her nerves, took a damn good bikini photo.  She was eliminated fairly early on, though.  Since then, Tyra's actually helped foot the bill for her gender reassignment surgery and Isis is now living in the body she felt she should have been born with.  I'm curious to see where she fits in with all the intense personalities around her, because she was so go-with-the-flow in her own season, but I hope she does well! 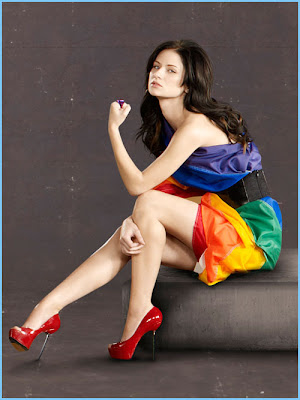 Ooh, Kayla!  Kayla is one of the few out lesbian women the show has had - and a damn good model to boot.  I swear up and down that if her cycle weren't the "high fashion cycle," she would have straight-up (er, pardon the phrasing) won that thing.  Kayla has a huge advantage in this competition in that a) she's still young, b) she's a really good model, and c) she's not crazy.  My money is on her for the win. 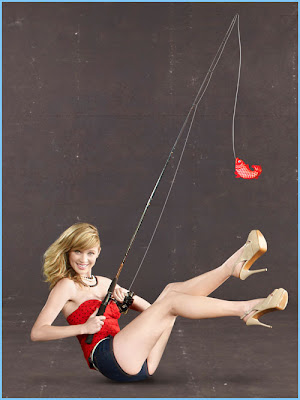 Okay, here's what you need to know about Laura.  She's from Kentucky, she used to castrate bulls on a regular basis, and her grandma Wanda Sue used to make her clothes.  OH AND SHE'S 5'6.  She's from the short cycle!  Don't get me wrong; I love Laura dearly (such spunk!  so endearing!) but I just can't see how she can be judged in the same way as all the tall girls.  But maybe she'll steamroller them - who knows?
LISA (C5) 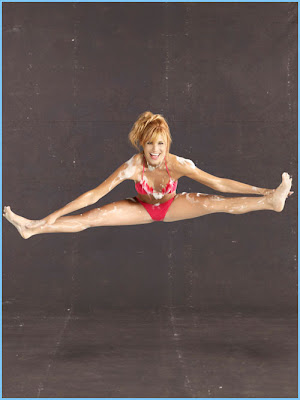 As you can see from the picture, Lisa is a delightful kook.  She also maybe loves red wine a little too much, but I'm pretty sure she went on Celebrity Rehab for that.  (I'm not positive.  I don't keep up with the VH1 reality shows very well.)  But Lisa taught me to always take a break and eat a cookie (and did so wearing crazy clown makeup, sunglasses, false teeth, and a curly wig) so I really can't be mad at her.  She did pee in an adult diaper while at a photoshoot too, though... so professionalism might be a problem. 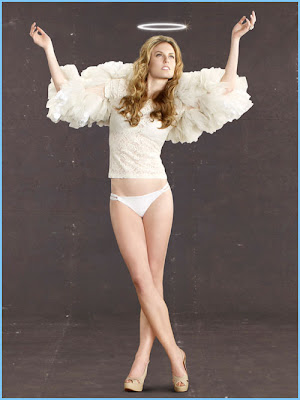 Okay, I confess: Shannon might be the All-Star I'm most excited to see again.  It's been so long!  She's from the original cycle, where Tyra and Janice Dickinson bumped elbows at judging simply because the tables were so small!  Shannon was a great model, and some days I think she should have won.  She's gorgeous, with a thousand-watt smile, and her personality is adorable.  But that was then... how have the last eight years (?!) treated Shannon?  I'm dying to find out.
SHEENA (C11) 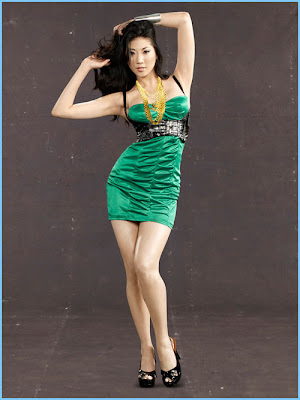 When Sheena Sakai made it on the show, she hollered, "You ain't ready for this yellow fever.  One time for the Asiaaaaans!"  And then I loved her forever.  No, in all seriousness, Sheena's pretty great.  There have been a dearth of Asian contestants (this is me shaking my head at you, Ty-Ty) and no winners, so maybe Sheena can deliver.  She had a problem coming off a little "hoochie" in photos, but hopefully she worked that out and will kill this thing!
As you can see, almost everyone is crazy.  And I'm loving it.  I'm also loving the fact that I already know SO. MUCH. about these girls and we're only in for some more insanity.
As for predictions?  Right now my money is on Kayla for the win, with Allison, Sheena, Bre, and Bianca rounding out the Top 5.  But we'll see!  The season starts September 14th.
Posted by DR SHE BLOGGO at 10:13 PM