I came to the realization today, as I watched "Acafellas," that this episode does not hold up well over time.  There are many things to like about it, including some good character development for Will, Kurt, and Mercedes, another instance of the Glee Club coming together, and some damn hilarious pieces of dialogue.  But there's also continuity issues from the previous episode, clunky execution of theme, and awkwardly on-the-nose pieces of dialogue. 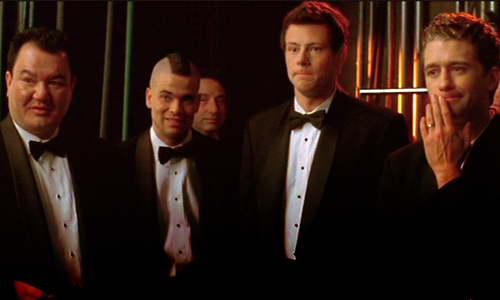 Some of the issues with "Acafellas" couldn't be helped at the time - like how Dakota Stanley is coaching a lead-less Vocal Adrenaline, when later in the season it's helmed by Shelby Corcoran and fronted by Jesse St. James.  Or the fact that Will claims he can't dance when he literally busts a move breakdancing five episodes later.  Even just the fact that both Will and Finn threaten to quit Glee Club is tiring when you know that they, and a handful of others, are going to do it again and again.  At the end of "Acafellas," Will claims that being a teacher is enough for him, and it's hard not to question that knowing that he's faced with a similar Dreams vs. Teaching scenario at the end of Season 2.

But it'd be wrong to fault "Acafellas" for these hiccups, because they weren't hiccups when it aired.  Even so, there are some shortcomings in the episode as it stands - mainly to do with the writing.

The main writing issue is that "Acafellas" didn't seem to pay enough attention to itself and the episode it followed: "Showmance."  Sure, Finn and Rachel reference their auditorium kiss and the fallout from it is apparent.  Yes, Terri's still fake-pregnant, and Will's still making headway with the Glee kids, much to Sue's dismay.  But the Acafellas also perform "I Wanna Sex You Up" at a school PTA meeting when just last episode, the Glee Club was told they were only allowed to sing songs from a strict school-appropriate list.  What happened to that list?  I wanna hear 99 Luftballons, dammit!  But perhaps this is just a minor quibble.  Still - knowing what's to come, this sort of continuity oversight is a rather ominous knell.

What "Acafellas" manages reasonably well is the storylines that directly relate to the theme of confidence.  By the way - this the first episode of Glee's Collection of Episodes That Overtly State the Theme in Dialogue Enough Times to be Noticeable and/or Annoying!  The "confidence" count: 8.  "Guts" comes in second with 5, and "balls" only managed 1 shout-out... although, "grow a pair" was used and we all know what's inferred, so I think it's safe to say "balls" comes in at 2!  Naturally.

Will's attempt to be in a boy band and show some guts worked well within the narrative, especially in that it tied to his relationship with fatherhood, and his own father in particular.  Will's dad is one of the better-used guest characters through the episodes, and "Acafellas" frames itself nicely with the elder Mr. Schuester's character development.  By episode's end, Will has inspired his dad to go back to law school and live his dream.  And as for Will, he decided that teaching was enough for him, after helping Puck and Finn tackle choreography in terms they could understand.

The Glee Club as well deals with issues of confidence as a group.  Sue attempts to impair the club by taking out their "shepherd" - she uses Quinn and Santana to plant the idea in Rachel's head that Mr. Schue can't choreograph well, and that they need to hire Dakota Stanley, show choir choreographer extraordinaire.  This storyline is also done well, with Mr. Schue respectfully bowing out, Finn threatening to quit, and Rachel too focused on winning to realize what the Glee Club's strengths are.  After raising enough money with a car wash (which... this is also a bit of a sticky plot point - if you can raise at least $8000 for Dakota Stanley, why does the Glee Club have such financial issues?) the kids find out that Dakota Stanley wants to kick half the members out of the club because they don't look a certain way.  (And apparently, Artie's not trying hard enough at walking.)  When everyone - except for the cheerleaders and Rachel, interestingly enough - walks out anyways, Rachel steps forward and fires Dakota Stanley.  Because they're going to win on account of their differences.

This is a lovely concept to have introduced at this stage, because it lays out exactly what the Glee Club's strengths are.  Before this, the plot always pointed out what the club's failings are, naturally, because they are the underdogs.  But "Acafellas" presents the Glee Club's greatest asset in a single line of dialogue, and it's one of the few things that never gets old: seeing how these misfit kids embrace their differences and how they're rewarded for it.

It's interesting, though, that Rachel is the one to fire Dakota Stanley.  It's a nice step on her arc, where she realizes that she's not willing to sacrifice her identity simply for a trophy.  But what's interesting is that she is a character that needs to have that delineated.  I mentioned earlier that she initially stands with the Cheerios, the school's villains, when it comes to standing by a changed Glee Club.  Rachel, by design, is not so different from Sue and her minions, and the narrative (and her character) can only be bettered by putting Rachel in situations that force her to make a choice - especially when she chooses the traits that align with the show's message: teamwork and loyalty, authenticity and fairplay.

"Acafellas" finally started to dig into some other characters as well, which is a plus.  Puck got his own mini-narration, and Kurt and Mercedes got some screentime - complete with a storyline for Mercedes!  To be honest, I like the Mercedes storyline in and of itself.  It's executed well enough, and makes Mercedes sympathetic and likeable and allows us to get to know her past "sassy black girl," which was previously our only marker.  But Mercedes' storyline doesn't really fit into this episode, thematically.

You know it's an issue when Mercedes' involvement doesn't kick off until 12 minutes in.  But even so, her arc is not about confidence at all.  She wants a boyfriend because she's lonely.  Which is all well and good, for the aforementioned reasons, but at the end of the episode, who's the one who finds the confidence to do something?  Kurt.  So while I appreciate the screentime (and solo!) for Mercedes, it's actually Kurt's story, thematically speaking.  I wish there were a way to keep Kurt's coming out at the end of the episode (because it is very sweet and honest, and I love that Mercedes is the first person Kurt's told) but also have Mercedes' participation speak to confidence.  You could argue that Mercedes had her sights set on Kurt because she wasn't confident enough to believe she could get a guy on the football team, but that point wasn't really communicated to full effect.  Mercedes just seemed to have bad gaydar.

Really, the only way Mercedes' storyline connected into the bigger picture was that Santana and Quinn encouraged her to go after Kurt, in a mirror of their encouraging Rachel to pursue Dakota Stanley.  The explanation was that Sue wanted her minions to go after the "sheep" of the club, after they took out Mr. Schue.  But Santana and Quinn only went after Mercedes, and it wasn't clear what their intention was.  Was it just the impending heartbreak of trying to date a gay guy?  Or were they trying to wreck Kurt and Mercedes' friendship and get one of them to quit Glee?  Both are plausible, but neither were really outlined in a way that made sense.  The characters just did things for a basic reason because there was a desired effect that needed to occur.

The dialogue in this episode is both divine and atrocious.  In the most basic summary, almost every line of comedy is gold (from "Who's Josh Groban?!  Kill yourself!"  to  "They found out we've been serving their children prison food!") and a lot of the plot-related or dramatic lines are weak.  This is, of course, evident by the repeated use of the words "confidence" and "guts," but Mercedes' dialogue was at times emotionally on-the-nose.  Where the comedy flew sharp, fast, and easily, everything else just felt slightly clunky.

And beyond that, it bugged me how much of Finn's dialogue in particular (although Puck had some too) was gender specific.  He calls Rachel "chick batty," asks about "one of those chick things," and claims that wounding someone's confidence is really tough, especially to a guy.  When combined with the fact that the only woman's storyline in this episode wasn't actually about finding confidence - and that the gutsy resolution went to another dude... well, it makes me a little cranky.  "Acafellas" does not hold up well when looked at under a feminist lens.  (Although, I've had gender issues and Glee on my mind lately.  You'll find out why soon enough.)

"Acafellas" ends with everything back to the status quo - Will returns to the Glee Club, they embrace their differences, and Sue's plan failed.  Santana and Quinn get their tanning privileges revoked (Naya Rivera's reaction to that never fails to crack me up) and apparently, Quinn learns an important lesson - that if you truly believe in yourself, you don't have to bring other people down.  I'm not really sure why they gave Quinn this line, other than for the purpose of the episode's theme, because Quinn didn't have any character development at all in "Acafellas," which at this point should surprise no one.  But even so, it seems a bit early for Quinn to be learning this lesson, and it's a waste of progress if we don't actually see her learn it through storyline.

In all, "Acafellas" is therefore kind of a mess.  Only the storylines that directly relate to the episode's theme are strongly executed, and everything else is just half-heartedly assembled without the proper storytelling cues in place.


The RBI Report Card...
Musical Numbers: A+
Dance Numbers: A+
Dialogue: the funny half is an A+, everything else? C.
Plot: B
Characterization: A
Episode MVP: Mercedes Jones.
Posted by DR SHE BLOGGO at 4:55 PM