Look, another RBI Report!  Unlike me and my reviewing skills, Glee moves fast.  "Showmance" doesn't waste any time furthering the plot and complicating the storylines.  Shall we? 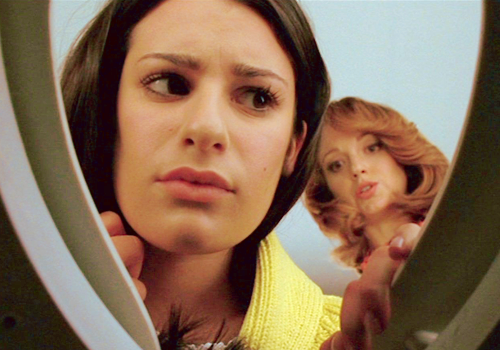 So, after the Pilot merged a little band of misfits together with a scrappy rendition of "Don't Stop Believin'," "Showmance" gets everybody properly kicked off on their journeys.  And quickly!  The stakes and obstacles roll over pretty rapidly, and looking back it's not difficult to see how easily these were worn out.  Just in this episode, the Glee Club experienced a lack of participation, opposition from Sue, lack of financial backing, misguided direction from Mr. Schuester, and problems with innappropriate content.  All of these issues have randomly been revisited at least once.  Of course, though, "Showmance" came first and so it's all still fresh and shiny.

And honestly, the main appeal of "Showmance" is not in the details surrounding the Glee Club's struggle to perform at the assembly and gain membership - but rather in the character moments and relationship storylines.  Things happened fast here, too, though.

Rachel and Finn grow closer, after Emma convinces Rachel to pursue common interests (without relating at all to her circumstances, no sir).  And not only do Rachel and Finn practice singing together, but Rachel goes so far as to offer a little kissing practice too.  Whoa!  This is huge for a second episode!  The barely-established love interests are kissing already?

Sometimes I wonder if Ryan Murphy & Co. put the cart before the horse by introducing a Finn/Rachel kiss before these two really know each other at all.  Technically, they're breaking a lot of storytelling rules - which is not necessarily bad.  It's bold.  And honestly, as a standalone episode, I think it works.  It's not unreasonable that Finn and Rachel's connection would manifest into some tonsil hockey (slash-Mailman-inducing-incident) at this stage of the game, and honestly, it is a bold move for the progression of their relationship.  A lot of it hinges, of course, on what comes after, which is naturally up for argument, but here?  Here it works.

Because it actually is charming at this point for Finn to say he checked for Rachel under his bed, because he also says she's cool and her involvement in his life directly correlates to the blossoming of his arc: he wants to be good at singing, like her.  It's very simple fulfillment for a much simpler time.  It means something for Finn, a popular boy, to say Rachel is cool, in a very simplistic way.  And it means something for Finn to feel drawn to Rachel in a way he can't explain because he barely knows Rachel and she represents Glee Club and the part of his life he is embarking on.  Even though it happens so soon in their narrative, the Finn/Rachel picnic makes sense, and works for both their current emotional place, and the place in the show's timeline.

Onto other couples moving quickly!  Will and Emma spend the episode hanging out, and it becomes clear that while Terri is dominating his home life, Will has a sympathetic ear in Emma.  After their late night cleaning-turned-therapy session - complete with sexual tension - Emma basically came right out with it, asking Will: "What are we doing?"  It's rare (and welcome) when a fictional couple who's clearly falling in love openly understands that they are falling in love.  In the early episodes, Emma is very aware of this, and Will seems to grasp the concept (mostly) as well.  But again - this is so soon!  Usually couples namby pamby about for a few episodes, in complete delusion about their flirtations until an outside party points it out and then they freak.  But Will and Emma basically acknowledge that they are foolishly embarking on an emotional affair, and backtrack.  (Of course, this doesn't stick, but it does come back around again at least once.)

This episode is interesting in that there is very little holding it together, thematically.  It's mostly just a linear progression from the previous episode, and with the exception of the parallels between Will and Finn's love lives, it's all rather disconnected.  Which is why, I suppose, the episode is simply titled "Showmance" - it's really only glued together by the central romances.

Of course, there is also "Push It."  Maybe "Push It" is not romantic, but there's also a large bulk of "Showmance" devoted to teens and sex, which is in turns ridiculous, embarrassing, hilarious, and awkward.  ("Push It" somehow manages to embody all of these things.)  Rachel disrupts a Celibacy Club meeting, where balloons popping makes angels cry, and declares that girls want sex just as much as boys.  Finn has "early arrival problems" which can only be assuaged by thinking of that time he hit the mailman with his car.  (Which, by the way, is one of the most hilarious things Glee's ever done, in my opinion.  I will never get over Finn's innocuously doofy "Driving is fun!" followed by Carole's horrified screams.  I laugh hysterically every time.)

At episode's end, the Glee Club lives to see another day, and Quinn and Terri throw wrenches in the romances: Quinn joins Glee to get Finn back, thereby breaking Rachel's heart, and Terri announces to Will that she's pregnant with a baby boy, and not a chicken bone.  A few things here, shall we?

Firstly, Terri.  What's wonderful about the moment where Terri tells Will she's pregnant is that it almost isn't.  It's written so that Terri has a decision.  She pauses, when Will asks her her news, and for the briefest of moments you think she's going to tell the truth.  She almost does.  She could've made that whole dinner out of guilt for not being pregnant, and she was going to tell the truth.  But she freaks out, and in this tiny split-second, she makes a choice.  She's delusional, and a coward, so she lies.  I prefer to look at this scene not as things being complicated for Will, but rather a gauge for the state of their relationship and who Terri is as a character.  Terri is not a villain.  Terri is afraid, and foolish.  And what's unfortunate is that this interpretation is only occasionally manifested in subsequent episodes.  But "Showmance" got it right, because in "Showmance," we got to see Terri make a choice.

Secondly, Rachel.  "Showmance" was actually the first episode of Glee I ever saw (I randomly tuned in on 09/09/09) and the "Take a Bow" sequence was what made me fall in love with the show.  It's classic Glee, and an excellent use of the show as a musical: Rachel sings her heartbreak into an empty auditorium, cross-cut with her singing into her hairbrush and singing directly at a happy-in-love Finn and Quinn, who are completely oblivious to her turmoil.  It's some pretty great angst - not to mention an informed song choice and well-executed interpretation of a pop hit to have meaning in the narrative.  "Take a Bow" was where Glee had me won over.

Beyond that, Rachel herself is an interesting fixture in "Showmance," and it really only furthers her construction as the show's main character, no matter how many relationship troubles Finn and Will experience.  Yes, she is jealous of Quinn and wants to be Finn's girlfriend, but she also steps forward as a leader of the club, and makes creative decisions against Will's direction - decisions which turn out to be the right ones.  And more than that, her projected character arc is also solidified in this episode, independent of her boy trouble.  Will takes her solo away, and upon Rachel's protests, he promises that while she may not always be the star, he'll make sure she always has fun.  Which is darling and sweet, and when married with the concept that Rachel's purpose in the narrative is to be accepted and gain some friends, creates a future arc for Rachel that held a lot of potential.  It also strikes a unique relationship with Will and Rachel, where Will delivers tough love but always promises to have Rachel's back - which unfortunately has faded away in subsequent episodes.

In all, "Showmance" is a solid episode, with major advancements in relationship drama as well as a quick rotation of the stakes and obstacles.  Even if quickly, though, the character interactions are genuine, well-communicated, and entertaining.


The RBI Report Card...
Musical Numbers: A
Dance Numbers: B
Dialogue: A+
Plot: B
Characterization: A
Episode MVP: Emma Pillsbury, for her marvelous pamphlets, excellent counseling, much appreciated self-awareness, and a stunning (if rainy) rendition of "All By Myself"
Posted by DR SHE BLOGGO at 8:58 PM