Santana Lopez and What Lies Beneath: Part 2 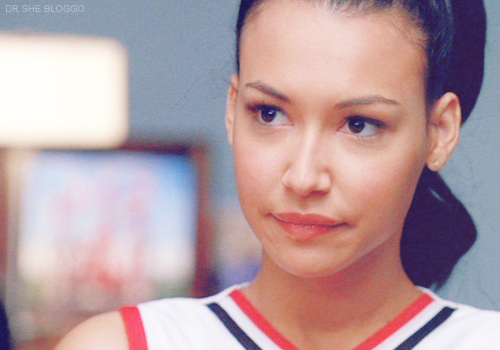 SANTANA AND THE CHEERIOS
For the majority of her time on Glee, Santana Lopez has been a Cheerio.   In fact, it took us thirty-two episodes to see Santana out of her uniform, and in plainclothes.  But despite this, we don’t really have a clear picture of what Santana feels towards the Cheerios and her place among them.

The Cheerios Uniform means something.  It is not just any old school uniform.  Sue Sylvester’s cheerleaders wear their uniforms every day, as a symbol of their status, broadcasting to the plebeians of McKinley that they indeed have the power bestowed to them by success and popularity and Sue herself.  And Santana is introduced to us as one of them, as someone who values that.  She is a sycophant of both Quinn Fabray and Sue Sylvester, hiding comfortably behind three layers of protection from even being called a loser, let alone actually being one.

But as time has worn on, it’s become clear that Santana Lopez is no one’s minion.  Her relationships with both Sue and Quinn have turned rather antagonistic, perhaps at the hand of Santana rebelling against what it means to be second-in-command.

For as much as Santana behaves as a Top Dog, it’s amongst the Cheerios where she is never quite the top of the pyramid.  Sue is God, Quinn is Queen, and Santana is still the Jester.  She is nothing more than a Boob Joke to Sue now, and Quinn ratted her out, betraying her trust and sending her to the bottom of the pyramid.  Santana is on the outs with her erstwhile leaders, and we’re left wondering how exactly she feels about it.  (More on Santana and Quinn in a future part, fear not.)

From Day 1, we were to assume that Quinn, Santana, and Brittany operated as something of a unit.  They were packaged up and delivered to us as a maligned trinity, three mean girls who had something to gain from destroying the Glee Club.  But since then, the contingent has splintered, and we’re left mostly in the dark about the real relationship between the three girls, having never really known their true opinions about being a Cheerio in the first place.

In “The Sue Sylvester Bowl Shuffle,” all three Glee Cheerios gave up Glee Club by the end of the episode - but they were denied, by the writers, the opportunity to make their own decisions.  They were instead convinced by Finn, which weakens their choices and leaves us wondering about their uninfluenced emotions.  In the bathroom scene, Quinn says she’s torn, and then Santana says she’s not.  That’s all we got, and the fact of the matter is that’s not terribly indicative of any clear-cut feelings about Glee vs. Cheerios.  The writers behaved as though the girls would inherently choose Cheerios in the frame that they are malignant and that the Cheerio Squad is dominant in its villainy - not because cheerleading could provide the trio with security and success, or the possibility of university scholarships, or even that it could maybe - gasp! - make them happy.

It has become painfully clear that Glee’s writers give little respect to the Cheerios as a valid extracurricular at McKinley High, largely because they’re too busy bogging down Sue Sylvester and her teenage associates with the veneer of malefaction.  What’s worse about this is that the show has deliberately made an effort to humanize Sue, Santana, and Quinn (Brittany was never terribly nefarious to begin with) and yet they often forget those instances and continue to frequently and ignorantly paint the girls in a single, two-dimensional layer of bitch and villainy.

“The Sue Sylvester Bowl Shuffle” presented the notion that the Cheerio Gleeks had to choose between their two extracurriculars, and simultaneously had a built-in opportunity to therefore let us understand the Cheerios’ feelings about their participation on the squad.  We actually have enough reason to believe that all three, including Santana, would have just cause for choosing Glee Club on their own - the first time around.  But instead, the show denied them this opportunity, operating solely on the assumption that Quinn might be torn, but Santana wouldn’t be (clearly forgetting that Glee Club is the best part of Santana’s day) and Brittany is always just Brittany.  And then in the end they made their decision because Mr. Quarterback breezed through with his Ethos and inspired them to Do The Right Thing.  Oh, missed opportunities and ignored potential - not to mention the faintest, stomach-turning whiff of sexism.

Of course, the result of that plotline is what is perhaps most interesting about Santana’s relationship to the Cheerios: examining how Santana behaves now that she is not a Cheerio.  That definition, the one label that gave her power in the halls of McKinley High, is gone.  Santana no longer wears the impervious red and white uniform, and we are finally afforded the opportunity to see who she really is: how she dresses, how she fixes her hair, how she interacts with her peers, what her bedroom looks like - it’s no accident that by having Santana shed that external armor, the writers are now allowing the audience to see a glimpse of her true self.

At the same time, Santana’s post-Cheerio existence lends itself to the interpretation that she is having something of an identity crisis.  The show is frankly not quite connecting this concept to Santana’s status as an ex-Cheerio, but I think the evidence and timing is strong enough to draw the conclusion that perhaps Santana is re-evaluating her identity and sense of self without that uniform.

Since “The Sue Sylvester Bowl Shuffle,” Santana has had her guard down and demonstrated a full range of emotions in a multitude of fairly surprising scenarios - sure, she schemes easily as usual, but she’s also flown into hysterics at the drop of a hat (or alcohol), struck up a partnership with Sam, seemed to twice fangirl a performing Rachel Berry, penned a jazz number (with Tina!) about her boyfriend’s fish face, and dropped her heart in the middle of the McKinley Hallway in hopes that Brittany would catch it.

Of course, the last of those examples is perhaps the headlining reason to believe that Santana, without her Cheerios uniform defining her, would be re-examining herself and her identity.  It’s no coincidence that the show has Santana jump-starting hers and Brittany’s Real Feelings Love Story when they’re off the Cheerios, allowed to dress how they want to and be who they want to within the freeing safe space that is Glee Club - but it’s also not clearly demonstrated onscreen.  And to those crying foul about Santana’s sudden qualms about her sexual identity: perhaps if the writers connected the idea that she feels vulnerable without her Cheerios uniform to the notion that she’s scared of confronting her sexuality, the development wouldn’t seem so jarringly uncharacteristic.

Regardless, it’s unclear what Santana’s future with the Cheerios will be - she currently shows no signs towards returning to the club, especially not while Sue continues to barrage her with boob jokes, and with the prospect of a sexuality-centered storyline on the horizon.  But even with a cheerleading-free future, the fact of the matter is that we don’t quite know exactly what Santana previously felt about that sphere of her life, in any real and tangible way, for those thirty-two episodes where cheerleading was omnipresent in Santana’s existence.