Santana Lopez and What Lies Beneath: Part 3 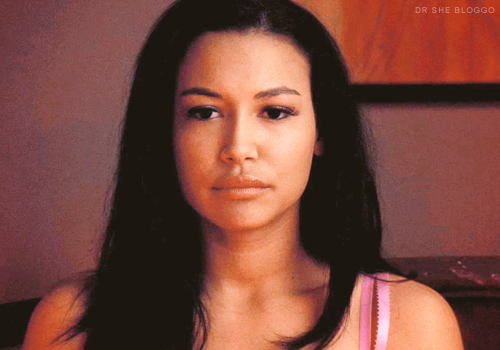 SANTANA AND RELATIONSHIPS
Earlier in this piece, I discussed the notion that Santana has historically been treated in the role of jester, as a supporting character who exists only to crack jokes and cause problems.  It’s because of this trend that it becomes difficult to examine Santana’s onscreen relationships and draw informed conclusions about them.

As a fringe character, Santana was wielded in accessory to others’ storylines, often making her a romantic obstacle or plot device.  What do we know of her relationships from this time, then?  Hardly any of them were presented from Santana’s point of view, so with the recent exception of Brittany, we know little to nothing about the state of Santana’s feelings about her interactions with several other characters.  Rather, we have to assemble the writers’ somewhat inconsistent evidence, look at Santana’s actions, read between the lines, and try and reach our own wobbly conclusions.

The first person Santana was truly introduced in conjunction with was Puck.  Assumedly, they were dating at the time of “Acafellas,” when Mercedes longingly witnessed them kissing in the hallways.  Santana broke up with Puck over his credit score, but then sexted him while he was babysitting with Quinn.  She got jealous over his dating Mercedes, and insisted they were dating again in Season 2 - even fangirling Puck’s alleged badassness in “Never Been Kissed.”

Santana and Puck as a unit existed originally in periphery only, to serve as contrast to our main characters in their storylines.  But even after the dissolution of their relationship, they were lumped together as ne’er-do-well occasional sex buddies, with Santana firmly demonstrating opposition to Quinn, Mercedes, and now Lauren as Puck’s other romantic interests.  In the case of Mercedes and Lauren, were Santana’s physical tantrums manifestations of actual jealousy over Puck as a person, or is Santana just possessive and operates on the assumption that people belong to her?  (I tend to lean towards the latter interpretation not only because it amuses me when played for comedy, but also because in dramatic purposes it forces the question, “Why, then?” and the potential answers to that are nothing short of fascinating.)

Regardless, there are so many questions to ask about the nature of Santana and Puck’s relationship, questions that are too interesting to chalk up only to the fact that they are non-committing cool kids who occasionally hook up.  Especially now that Puck and Santana are developing into their own actual relationship storylines, it forces us to look back and question what was different with their early romantic interactions as opposed to now.  Will we ever understand what Santana feels, or felt, towards Puck?

It’s unlikely that this will happen, as the show is now moving them away from one another and into less singularly sex-driven relationships.  This only makes Santana and Puck’s early interactions all the more interesting, and mysterious.  Santana and Puck's relationship is essentially an echo, the intangible reverberation of something we never heard in the first place, and the evidence of which is growing fainter - but still repeating.

Perhaps even more nebulous than her relationship with Puck is Santana’s relationship with Quinn, largely because the show originally designed them as friends, but in practice they operate primarily in opposition - and yet we hardly see them interact.  There’s endless debate over the question of Santana’s level of loyalty to Quinn, especially under the duress that Quinn has not shown any loyalty to Santana whatsoever.  Frankly, there is a neverending parade of question marks marching along Quinntana Boulevard in particular, and the show makes no effort to clear up any of the confusion.

Assumedly, Quinn slept with Puck when he was technically dating Santana.  The writers glossed right over that.  Then, Quinn discovered she was pregnant.  Did Santana keep it a secret, or did she tell Jacob Ben Israel?  Evidence is inconclusive.  (Sure, Santana had something to gain from Quinn’s demotion, but no connection is made that it was she who let the secret slip.  JBI just turned up one day with the scoop - and to those of you who take Santana's loose lips over Brittany's stork-induced pregnancy as evidence, well... I'm unconvinced.  It's really just plot device vs. plot device in that showdown, and I'm more inclined to give weight to the first one.)

After Quinn's pregnancy was out in the open, Santana still sexted Puck and bitched out her erstwhile friend for being naive.  Fast-forward through a wasteland of no interaction, and we land squarely at Quinn’s betrayal in “Audition,” which led nowhere.  We can only assume that Santana purposefully outed Quinn and Finn’s affair in “Silly Love Song” in retaliation to that offense - but with ten episodes spanning the interim and the word “revenge” spilling untethered from Santana’s lips, the connection is anything but clear.

The show has both intentionally and inadvertently constructed Santana as a character who lives in Quinn’s shadow.  She is second in command to Quinn, and can, so far as we’ve seen, only be Head Cheerleader when Quinn isn’t on the squad (and we were witness to none of Santana’s regime).  Each of her male romantic interests has either left her for Quinn, or had Quinn first.  The writers even go so far as to include Quinn in one of Santana’s alcohol-induced hysterics, having Santana weep at Sam about how he  must like Quinn more than her because “she’s blonde and she’s awesome and so smart.”  There’s clearly an interesting dynamic between Quinn and Santana, that speaks heavily to loyalty, power, and envy.

Consider for a moment, Santana’s assumed silence in the wake of Puck and Quinn’s one night stand.  It stands to reason that she should have had something to say about that, based on her later efforts to protect her “territory” from Mercedes and Lauren.  But the fact that she didn’t begs the question: does this mean that the writers constructed that trait for Santana in later episodes when they had a clearer idea about the character and her purpose, and is therefore writer error?  Or, is there something about Quinn sleeping with Puck that’s different from Mercedes and Lauren dating Puck?

Conclusions there, based on the constants and the variables, could be interesting: is it that Quinn slept with him and didn’t try and date him?  And what does that say about Santana and any potential issues with commitment and the meaning of dating versus the meaning of sex?  Or, is it because it was Quinn versus Lauren or Mercedes, and what does that say about how Santana views Quinn?  It dances along the line of respect for Quinn, or fear of Quinn, or feeling inferior to Quinn, all of which is frankly rather intriguing, especially in combination.  In general, it’s easy to conclude that Santana buries something of an inferiority complex when it comes to Queen Fabray, and pairing that in conjunction with Santana’s permanent Second-Best status, it fosters a fascinating, and largely unexplored dynamic.

Basically, within the construct of the narrative, Santana is often portrayed to be cut from similar fabric as Quinn - generally manipulative and scheming to meet her needs.  But rarely is the dynamic between the two girls expressed in actual interaction, and when it is they are mostly at odds.  We are therefore left to fill in the blanks and poke at the fairly compelling characteristics of what is unfortunately uncharted territory.

Santana’s relationship with Finn makes little to no sense based on the fact that the writers wielded her in that plotline mostly to create drama in the Finn-Rachel coupling.  It’s so fitting that Santana’s first solo graced our ears not because of an actual Santana plotline, but rather as a result of her prowling on the main character’s love interest for reasons we didn’t really grasp.  (I can’t take the Madonna-inspired younger-guy-theory seriously because a - it was only weakly used to tie the actions into the theme of the episode, and b - they explicitly stated that Finn is three days younger than Santana, which solidifies it more as a joke than anything else.)

Despite the fact that Santana takes every opportunity to insult Finn (it is exhausting to look at him, after all, even if you can jiggle his man-boobs), the show stubbornly kept Santana floating in Finn’s romantic periphery from “Hell-O” all the way until “Special Education,” when the truth of their tryst finally came out.  (And hey, if you want to talk about Santana, loyalty, and secrets, why did she keep quiet about sleeping with Finn for so long?  Did she just not care?  Was she respecting his wishes?  Was she - gasp - protecting Rachel’s feelings?  Or was she just waiting for the opportune moment to cause destruction with a well-timed truth bomb?  You decide.  The writers didn’t.)

What do the writers want us to understand about Santana’s feelings towards Finn - if anything?  Yes, she brutally insults him, but there’s also the evidence in “Furt” that suggests she feels something towards Finn.  Is it loneliness?  Embarrassed affection?  Self-loathing for being a “temptress?”  Those potential “second choice” feelings bubbling up to the surface?  And then there’s her pointed flirtation with Finn in “Special Education” - was that real, or just to mess with Rachel?  Neither seem to fit entirely, and more than anything the moment reeked of plot device, so that we could feel bad for Rachel and root for Finn to choose her instead.  Conclusions shoot in all directions, and none of them are solidified onscreen because the writers wield Santana as a third party in all storylines, and we hardly know anything from her point of view.

And then there’s Sam.  It’s no coincidence that we perhaps know the most about Santana’s relationship with Sam, since she has been dating him post-Cheerios, in the midst of Glee actually giving some serious screentime to our girl.  But it’s also difficult to deny that the Sam-Santana coupling was borne of Santana meddling in Sam and Quinn’s storyline, under the pretense of making Quinn (and/or Brittany?) jealous.

Santana strikes up her relationship with Sam in the wake of being single on Valentine’s Day, which perhaps speaks to romantic isolation, but when it comes down to it, the connection is once again left undrawn.  She has stayed with Sam ever since, in exuberant praise (or is it derision?) of his froggy lips, trouty mouth, guppy face, etc.  (Poor Chord Overstreet.)  It’s fairly easy to conclude that Santana doesn’t take Sam very seriously, but it’s also easy to extrapolate that her reasons for dating him could be, and perhaps are, but once again are left unexplored.

There comes a point where Santana has to be at the center of her own universe, and not a guest star or featured player in everyone else’s.  And while we may finally be working towards that goal, there’s still 36 episodes where Santana is an insult machine, an emotional wrecking ball, and a complete and utter mystery when it comes to relationships.