Santana Lopez and What Lies Beneath: Part 5 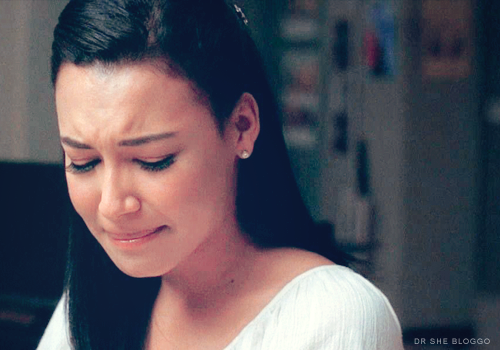 SANTANA, VULNERABILITY, AND LOVE
In the previous installment of Santana Week, I discussed the idea that much of Santana’s true character can be found in the negative spaces, in what she isn’t saying.  Santana is a character who almost always speaks her mind but rarely speaks her heart.  This construct lends itself to that method of interpretation, running through the undercurrent of all episodes, and finally being touched upon in “Sexy.”  Brittany insinuates that Santana believes that “it” (being sex, or relationships, or life, one could interpret) is better without feelings.

In general, that holds true to most of Santana’s existence on the show.  Santana is constructed as an embodiment of sex.  She is a temptress, the girl who takes boys’ virginities without batting an eye, who makes dirty jokes in the presence of attractive older dentists, and perceives herself as the hottest “piece of action” in the school.  She’s had mono so many times it’s turned to stereo.  She sexts.  She’s like a lizard; she needs a warm body underneath her so she can digest her food.  Every “relationship” she’s been in has been manifested entirely in physical attraction.  Her first singing lead?  During sex.  First full solo?  A pair of floating lips onscreen.  Original song?  An ode to her boyfriend’s mouth.

In that Santana is more or less defined by sex and The Physical, both within the narrative and as a construct of it, it is inarguable that she, as a character, has little issue with it.  But as an extension of that notion, using the theory of Santana and nots, it’s equally inarguable that, conversely, Santana has paramount issues with what lies beneath: emotions and vulnerability - issues with love.

When has Santana ever shown true feelings that aren’t stacked on top of a healthy layer of disdain?  You could argue that this is why we don’t know much about Santana’s relationships with Puck, or Finn, or Sam, or Sue, or Quinn - anyone, really, because she refuses to confront any feelings.  (You lucked out with that one, writers.  Don’t think I’m going to let you off that easy, though.)

Santana doesn’t want anyone to know her true feelings.  Feelings mean love.  Love means vulnerability.  And Santana doesn’t want to be vulnerable.  So she buries her feelings, and pushes people away so they won’t find them.  She hides underneath a mountain of contempt, masterfully mixing indifference and scorn with precision.
High school could be really hard for Santana.  It’s hard for everyone at McKinley High.  But Santana probably knew that, or learned really fast.  So she chose her armor (her Cheerios uniform), her shield (emotional distance), and her weapon (insults) and readied herself for battle.  She fought hard for status and popularity, because it granted her power - the power to keep people beneath her, so they would never really know her insecurities.  And it made her feel good about herself and what she chose to accomplish.  It gave her a shiny exterior that no one could touch.

But when we strip away those defenses, we are left with someone who has purposefully chosen to isolate herself - hence the Santana-sans-Brittany Loneliness Construct that the writers flirted with (albeit clumsily) in the span between “Duets” and “Sexy.”  Combine that self-imposed isolation with her portrayal as a sexual being, and with her reasons for getting a boob job (wanting to be noticed) and Santana thus becomes someone who perhaps doesn’t believe in love, but, tragically, still wants to be loved.  Because maybe if somebody loved her, she’d believe in it.

As such, Santana Lopez’s self-worth proves to be astoundingly low in certain cases.  Which makes sense, considering how much bravado she covers up with.  As much as I do believe that Santana is genuinely a badass, there’s a specific amount that is compensating.  Santana has the ability to construct her image and the way she’s seen: she’s only as badass as she wants to be.  Beneath that, there is someone who gets a boob job at 17 because she doesn’t like the way she looks - even though she’s technically a popular pretty girl.

Despite the fact that Santana wants to be loved, it’s made very clear that she distinguishes sex from dating, and sex from feelings.  To Santana, “sex,” “dating,” and “feelings,” are three separate entities that should not be mixed. But there’s a very blatant discrepancy in that notion: she claims to be dating Puck in “Furt,” which Quinn is quick to correct: she’s just getting naked with Puckerman.  The implications of this duality are interesting: has Santana started to blur the lines between sex and dating, or is it writer error?

Or, bear with me as we consider the two following scenarios.

Scenario 1: with Puck, she claims they’re dating when they’re just having sex.  But when she’s having sex with Brittany and Brittany tries to impose more on that ("Duets"), Santana back pedals and clarifies that love, specifically, is off the table - and brings Puck, specifically, back into the conversation.  She essentially tells Brittany that she is not love, but only a substitute for Puck, who is sex.  She pushes Brittany away at the prospect of love, and tries to limit their interactions to sex only.

Scenario 2: aside from the general instinct of pushing people away, Santana’s sex-dating logic works in exact reverse between these two instances from “Duets” and “Furt.”  So it seems to suggest as well that Santana just make up rules to justify her ill-defined relationship with Brittany.  It’s with Brittany that the “Sex isn’t dating rule” gets brought up, and she also tells Brittany in "Sexy" that fooling around with her isn’t cheating on Artie because “the plumbing’s different.”  So she can say that sex isn’t dating with Brittany because if it were, it would mean something, but with Puck, she can throw the word “dating” around because it doesn’t.  She may feel something for him, but it's probably not love.  She really is just getting naked with Puckerman.

Based on Santana’s previous rejection of the concept of love and the recent knowledge that she loves Brittany, it seems fair to assess these discrepancies under the logic of both scenarios.  If she loves Brittany but doesn’t want to show it, then she would try and define their relationship simply by sex, even if it meant pushing Brittany away.  And if she bullshits exception-based rules to justify her relationship with Brittany, she gets what she wants but doesn’t have to admit that she wants it.  It’s a win-win situation for Santana, who is (arguably) capable of love, and wants to be loved, but doesn’t want to be vulnerable.

This could only last for so long, though, especially considering Brittany’s apparent declaration of a Santana sex embargo at the end of "Duets."  It’s perhaps no coincidence that so much of Santana's relationship with love and feelings comes at the bookend episodes of "Duets," which implies a unity of two, and "Sexy," which, of course, dealt with sex in particular.  Santana distinguishes the two concepts: sex, and feelings - but the two episodes together synthesize much of what we can understand about her character and love.

Ironically, it was in “Sexy” that Santana finally came forth with feelings about Brittany, and we discovered that perhaps the reason Santana keeps her emotions bottled up is not only because they make her vulnerable, but also because she has so many.  When Santana’s guard is down (like when she’s drunk) her emotions get the better of her, and it suddenly makes even more sense that she would brick them up and refuse them any outlet to her environment.  If Santana let her emotions rule her existence, not only would she feel everything but she would also feel it magnified.  Her emotions would affect her, and Santana absolutely does not want that.  Her emotions - emotions for another girl - could threaten her status, her entire existence in the school.  But she wanted Brittany enough to put that on the line.

So Santana does indeed seem to be blurring the self-imposed boundaries between love, sex, and dating - or beginning to acknowledge that perhaps there are none - and it terrifies her.  This is someone who freaked out at the possibility of singing a love duet with Brittany, and who has never sung a love-oriented duet on the show in general.  Her solos are distinctly devoid of that kind of genuine emotion - “Like a Virgin,” “Bad Romance,” “Me Against the Music,” “River Deep, Mountain High,” “Science Fiction Double Feature,” “Valerie" - none of them explicitly speak to love in a romantic way, and a few directly act against it.  There is, of course, "Landslide," whose lyrics rather tragically ask the question: what is love?  And, of all things, that question is directed to a mirror.  Santana must ask herself: what is love?  (Technically that mirror is in the sky, but we're not really here to discuss lyrical interpretation in terms of Santana and religion or the concept of freedom.  Perhaps another day.)

Santana’s relationship with love is tragic and fascinating in that she desperately wants it, but has too low a self-worth to be convinced that she can receive it - and too opposed to vulnerability to always embrace it.  Now that she’s let that wall come crashing down with Brittany, it will be interesting to see how she recovers - especially because she was essentially rejected.  It therefore makes sense that Santana would ratchet up her efforts to protect herself - but in the wake of her hallway confession, the lack of a Cheerios uniform, and with a slushie on the horizon, it’s safe to say that Santana’s absolutely invulnerable days are over, for better or for worse.  Santana Lopez has a rough road ahead of her.