Santana Lopez and What Lies Beneath: Part 6 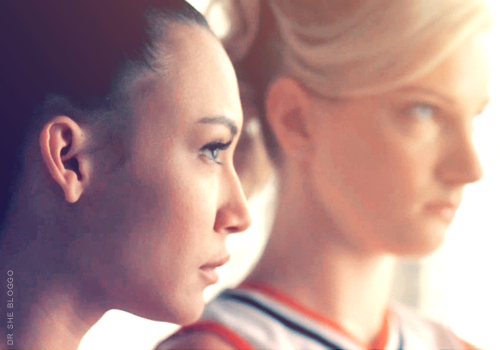 SANTANA AND BRITTANY
For twenty-five episodes, it was rare to see Santana Lopez without Brittany Pierce.  Her functional other half, Brittany was initially paired with Santana so that they could operate as bitchy co-conspirators, Sue Sylvester’s eyes in the Glee Club.  But as time wore on, the show began to wield them in their strength: as the true comedic duo of the ensemble.  Their unity became something of a mainstay, and was treated with a wink by the writers.  If Glee were a classic stageplay, then Santana and Brittany were the Shakespearean fools, scheming and clowning - putting on tricks for the audience without their cast of characters noticing.  Even though their villainy was important in holding up the plot, Santana and Brittany were originally there more for the spectators than for the storylines.

Because of this, they were early favorites - specifically in conjunction with one another, and the writers chose to play on this strength by moving the girls into the storylines.  The Back 9 brought us more Brittany and Santana moments than ever before, and they were allowed to interact in basic ways with other characters.  Since then, Santana and Brittany have been incorporated into the show both as individuals and as a unit, allowed their own storylines separate and apart.

But the true triumph of the Santana-Brittany dynamic is not necessarily in the successful transition from sidecar jesters to main-stage players.  No, the stronger accomplishment in the Santana-Brittany dynamic is that it manages to defy the shallowness common to supporting roles, and it does so completely as a result of its own unity.  Santana and Brittany are both three-dimensional, real characters because of the existence of their counterpart - Santana in particular.

Consider again, the idea that Santana’s true character is revealed in the moments of exception.  And consider, for a moment, who exactly is Santana Lopez’s exception.

Almost everything we know about Santana that runs deeper than “bitch” we learned through association with Brittany.  When Santana was only barbs and sharp edges, Brittany seemed to be the only person she liked.  She was Santana’s exception, and we wondered why that was.  These characters were virtually tethered together for the first twenty-five episodes of the show, and so it begged the question of Santana in particular, who seemed to hate everyone: why so inseparable - especially when being around Brittany seemed to require a lot of patience, as per the reactions of other characters?

The fact of the matter is that Santana Lopez seemed to feel disdain for everyone except Brittany Pierce.  It’s hard to argue with that conclusion.  And in “Sectionals,” their status as best friends blew wide open with the statement that if sex meant dating, Brittany and Santana would be dating.  It may have played as a joke, but that single sentence changed the course of Brittany and Santana’s dynamic, and reverberated through every subsequent interaction they shared.  Because if Santana and Brittany have sex, and Brittany seems to be the only person on the show that hasn’t been on the receiving end of a Santana snark brigade, then what does that say about Santana’s feelings about Brittany?

The show did nothing to dispel the conjoined nature of Santana and Brittany - in the wake of the reveal, they walked around with pinkies linked, went on dates as a single unit, and told Finn they’d make out in front of him - but he had to wait in the car first.  The show painted them as a freakishly functional duo, that seemed to have some kind of relationship beyond friendship, but that was also left largely unlabeled in favor of comedy.  Even so, that question, the question of sex-vs-dating and Santana’s true feelings, hung over every single Brittana moment.

Because they were always together, and they did link pinkies walking around the school, and they wore matching bracelets, and Santana peacefully snuggled her head on Brittany’s shoulder when Kurt sang “A House is Not a Home.”  And even though Santana had sex with Finn in “The Power of Madonna,” and fought over Puck in “Laryngitis,” it is with Brittany that she demonstrated any level of intimacy beyond what we expected her capable of.

Every shared look, conversation, and interaction was put under the lens of this detail, and all signs pointed to the idea that beneath her rough exterior, Santana Lopez felt something for Brittany Pierce - something that looked suspiciously like love.  It is therefore because of this notion that Santana is the lynchpin in the Brittana dynamic.  Based on what we know from “Sexy,” it’s safe to say that Santana is the one who makes the sex-dating rules, but she is also the one that seemingly breaks them.  Brittany appears to love everyone, including Santana.  But Santana appears to love no one, except Brittany.  And because of that, we saw Santana be something more than a bitchy cheerleader who sleeps around.

Of course, our suspicions were confirmed in “Sexy,” with Santana admitting, out loud, that not only does she indeed love Brittany, but that she also wants to be with her.  I don’t think I can express how huge a deal that action is for this character - and unfortunately, I’m not sure the show did either.

The Brittana-in-love relationship could have easily developed in the background, naturally and gracefully, without many obstacles standing in their way.  Truthfully, Brittana didn’t need to be an Angsty Love Story.  But in “Duets,” the writers chose their path, and now we have a throughline that was set up, and needed to unravel and be paid off carefully, with attention given both to the dynamic and its individual characters.  Because in “Duets,” the writers chose to separate Santana and Brittany, for the very first time.  And that too, should be a huge deal.  These characters were rarely seen out of each others’ company, let alone given divergent storylines.

But instead of focusing on the fallout of Santana pushing Brittany away and trying to define their relationship by sex only, the writers flung Brittany into a left-field pairing with Artie, and Santana was left to boomerang into the Finn/Rachel plot, and the Finn/Quinn plot, and got her very own romance with Sam - not to mention the strange hero-worship towards Puck that she expressed in “Never Been Kissed” (I still don’t understand that, and don’t feel particularly compelled to try).

“Duets” and “Sexy” are banner episodes for Santana’s arc, and yet we find that in the ten episodes in between, there is little evidence to see how Santana moved, emotionally, from Point A to Point B.  And that is something of a disappointment considering how important her actions are for her character.  In “Duets,” she refused to define a relationship by anything other than sex.  In “Sexy,” she proposed an entire relationship defined by everything more than sex: with love.  How did Santana make that journey?  I refuse to believe that a chat with Holly Holliday and a Stevie Nicks tune was all it took to get Santana to put her entire existence on the line for a relationship with Brittany.

There are those who claim that Santana’s actions in “Sexy” came from out of nowhere.  But there’s an important divide to distinguish.  It’s not out-of-nowhere for Santana to be in love with Brittany.  Based on their actions from “Showmance” through to “Duets,” it’s not a stretch by any means to assume that Santana has some very real feelings for Brittany - she’s her exception, after all.

But the idea that Santana confesses them and lets her entire heart spill onto the floor right in front of Brittany’s locker?  There’s barely anything there to pave the way for that moment - which is unfortunate, because that moment is paramount.  That moment not only defines the Brittana relationship, but also changes the course of it.  And more than anything, that moment embodies a change in Santana, and changes everything for her future at that high school.

But we never got to see Santana choose to make that change.  To accept that change, and embrace it.  She tells Brittany, “I have to accept that... I love you.  I love you, and I don’t want to be with Sam or Finn or any of those other guys.  I just want you.  Please say you love me back.  Please.”

If I could surround that speech with neon flashing arrows and confetti cannons and fireworks, I would.  That speech needs to be a permanently dog-eared page in the Book of Santana, because that was Santana changing everything.  She was accepting a change in herself, not only going against everything she chose for hers and Brittany’s relationship, but also throwing it all away for the opportunity to experience love.  She wanted to love and be loved badly enough that she rejected the way she defined every previous relationship she’s been in, and begged to be embraced by the one thing she’s scared of.  She didn’t just shed her lizard skin, she may as well have ripped it off and incinerated it, because that moment was Santana Lopez throwing her beliefs in reverse, baring her entire soul, and in doing so, moving her arc forward.

So why, oh why, did we not see Santana making that choice?  The events leading up to that confession were limited basically to “Sexy” only, and while “Landslide” and the other scenes were valid, it felt more like they were there to remind us that Santana and Brittany had some unfinished business from “Duets” - further evidence that there’s hardly anything spanning the in-between.  Not only that, but the particulars of their relationship don’t quite match up: at the end of “Duets,” Brittany seems to indicate to Santana that she’s cutting off their trysts - however ill-defined they were.  But at the beginning of “Sexy,” the same thing appears to be happening again - Santana wants to get her cuddle on, but Brittany expresses reservations, which seems to indicate that at some point in the middle, Brittany lifted the embargo and resumed the sweet lady kisses.

Regardless, the fact of the matter is that Santana’s choice to confess her feelings for Brittany is by far the defining moment for this character.  She is essentially choosing Brittany over everything else that she once put first - over her sex-dating rules, over her fear of love, over the need to protect herself from being hurt.  And we never saw how it came to be that Santana decided to work out her priorities and go for it.  Luckily, the scene still works without it because it is jarringly heartbreaking, and the speech is well-written and the performances are genuinely delivered.

And past that, it reinforces the notion that Santana Lopez is a complete character with depth and emotions because of Brittany.  Without Brittany, we would only know Santana as a scheming, bitchy cheerleader.  Santana may be the lynchpin in the Brittana development, but Brittany is the lynchpin in Santana’s character.  It is through Santana’s association with Brittany that we can discern that Santana is capable of love, and wants it, but is scared of it.  It is with Brittany that we can see Santana at her most vulnerable.    And it is with Brittany that Santana is allowed a fully-developed emotional arc on this show.  This rather lends itself to the statement that without Brittany, there would be no Santana - certainly not a complete character with real emotions and insecurities.

The show presents us with the notion that at least, they are best friends, and at most, they are soulmates.  But in how the show has constructed them, it’s safe to say that they are inextricably connected through their characterization, because with each other they are allowed to be more.  It stands to reason that for the benefit of their arcs, and the reparation of their episodes apart, Santana and Brittany must be restored to their unity, as equal parts of the same whole with mutual benefit to their characters’ journeys, together and apart.