Before I get started on today's exploration of Quinn Fabray, I just want to say thank you to those following along during the week's festivities!  I'm not gonna lie; I was a little dubious about stretching this exercise over a whole week's time, but I'm very happy it's being well-received.  And, this is my 100th post here at SHE BLOGGO!  Very exciting.  How on Earth have I been capable of writing so much?  Truly crazy.

And, speaking of writing too much, I have actually tacked on two more parts to the Quinn Fabray epic.  So, it will be a full 7-day week, instead of just a work week!  Tonight, I toast to wordiness, and to you, reading this. 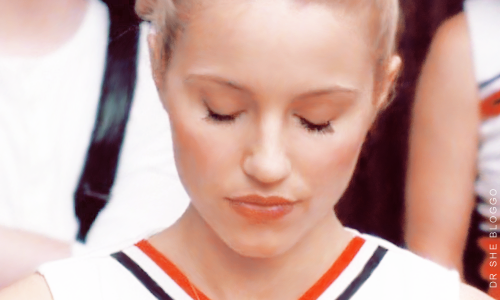 QUINN, THE BABY, AND PUCK

Oh, baby Beth.  I honestly don’t know what to think of this child.  It’d be nice to get a mention of her on the show, frankly - other than just flippant cracks about breast milk and stretchmarks.  Having a baby meant something, maybe even everything, to Quinn’s development, and the fact that it’s largely unmentioned is more than a little vexing.  I don’t care if the showrunners want to forget about the shows’ pregnancies: the characters shouldn’t.  And “remembering Beth” does not mean joking about stretchmarks; it just doesn’t.

Yet again, “Duets” seemed to enlighten us most to Quinn’s feelings regarding her post-baby situation, but it did so in the framework of her love life - how does having a baby affect her dating?  Which, granted, is interesting (I’ll take it!), but I wish to know about how having a baby affects Quinn, herself.

We all have our own impressions of how we think the baby changed her, thanks to the interpretation of a few scenes here and there, but we really should be getting something more concrete and direct.  I don’t think that these extrapolations are necessarily unfounded or invalid, but I’m hesitant to draw a link in places where the writers are not choosing to, and I’m frustrated at the fact that they aren’t.  I’d like to think that something is bubbling under the surface, and that we’ll get a more fleshed-out study in future episodes, but I can’t say I have complete faith that that’s the case.  Perhaps I should.

Even more than direct evidence on how Beth changed Quinn, I want to know Quinn’s feelings towards her daughter and daughter’s adoption.   I have a hard time believing that life could go back to normal so quickly after such an experience, yet all I can conjure up in my brain are assumptions about Quinn’s feelings.  We certainly haven’t heard anything about it from her in Season 2, except in relation to dating Sam.  I know she’s a fairly tight-lipped character, but it needs to be addressed.  And hey, did Quinn ever tell Rachel she gave her baby to Rachel’s long-lost birth mother who didn’t want a relationship with her?  Because that dynamic is just teeming with potential, and I will be adding it to my very long list of reasons of Why Quinn and Rachel Need to Interact.

As for her love life, Quinn Fabray has never been one to rely on a significant other for personal fulfillment.  Finn, however much she may have loved him, was a status boyfriend.  The show can’t seem to decide what Puck was - a drunken mistake borne of insecurity, or an actual potential relationship.  And frankly, I would like the writers to make up their minds.  I don’t really care one way or the other.  I just want them to decide.

The longer they wait on Quick - which, by the way, is either the most ironic or most accurate ship portmanteau - the less patience I have for being jerked around, and the less I will actually want to see them be together.  Puck and Quinn’s relationship, much like Quinn herself, was surprisingly well-developed in the First 13 episodes, and then ill-defined in the Back 9, only to come roaring back with an out-of-nowhere “I love you” in the season finale.  Character whiplash is not doing these relationships any favors, and for the record, having Puck and Quinn randomly look at one another meaningfully during musical numbers does not constitute any kind of progression.  It’s just another stall.

I will say this: really, a Quinn/Puck romance is irrelevant to Quinn’s character arc, which is perhaps why I feel a touch of indifference over whether or not they ever get together.  Quinn/Puck as a romance is primarily a vehicle for Puck’s character development, which I am certainly not going to deny, but I’d rather a relationship be worked into the development of both participants.  Otherwise, one half of the pairing is simply an accessory, an object to a subject, and it’s never fun to see a character disserviced.

Truly, and unfortunately, the only thing that links Quinn and Puck is a baby that’s not even a part of their lives - or this show - anymore.  I think it’s fair to say that Puck sometimes wants to be with Quinn, but seems incapable of actually doing so, while Quinn seems completely capable of being with Puck but she doesn’t really want to.  Regardless of whether or not you ship it, you can’t say that isn’t compelling.

In some ways, I think it’d be interesting to explore the idea of having a baby with someone and not actually being with them - especially in high school.  Even with romance off the table, the Quinn/Puck dynamic is rife with potential.  But Glee’s not delving into that.  At best, Quinn and Puck as a couple are being ignored as anything more than a punchline to a joke.  And were they ever together to begin with?  Evidence points in all directions.  I mean, c’mon, show.  Get your facts straight, and commit to something that could be really interesting, eh?

At the very least, Quinn and Puck’s shared past needs to be honored, outside of the context of dating, and the very real piece of history named Beth needs to be mentioned in a serious and significant way.  It is in this area that Season 2 is sorely lacking, where Quinn is concerned.  The other facets of her character are being represented at least somewhat reliably, whereas Beth and her history with Puck is being left almost completely ignored.  One more joke about stretchmarks and I’ll be at my wit’s end, writers.  If you’re going to joke about it, you damn well better include it in a meaningful way as well.

UP NEXT: QUINN, FINN, AND HER FAMILY

Master Post: CHECKING IN WITH QUINN FABRAY
Part One: QUINN, THE CHEERIOS, AND POWER
Part Two: QUINN, FRIENDSHIPS, AND KINDNESS
Part Three: QUINN, SAM, AND HAPPINESS
Part Four: QUINN, THE BABY, AND PUCK
Part Five: QUINN, FINN, AND HER FAMILY
Part Six: QUINNDEPENDENCE, AND THE MEANING OF THE WORD
Part Seven: CONCLUSION
Posted by DR SHE BLOGGO at 8:01 PM