Checking in with Quinn Fabray: the Conclusion 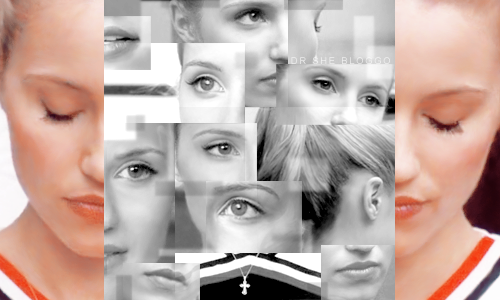 So, what’s the success level of Season 2 Quinn Fabray, and where her character is going?   It’s hard to make an overarching evaluative judgement, and frankly, I’d rather not.  Her portrayal and progress from “Audition” to “A Very Glee Christmas” has shown its fair share of successes and shortcomings - more or less in that order.

I’d say tonally, she began the season on target.  This is largely an evaluation of Dianna Agron’s performance - from “Audition” through “Duets,” her general demeanor is quiet, stoic, detached, and fairly kind, yet rather hardened.  Something heavy was hanging around her in those episodes - an air of sadness, even though we weren’t sure exactly what.  It’s fair to say that this is indicative of a post-baby emotion, but unfortunately we aren’t privy to the details.

Because of this, I’ve come to the conclusion that Dianna is great at providing material for us to interpret when she’s not the focus of a scene - which is lovely but also maddening because she’s usually not the focus of a scene.  Then again, when she is the focus of the scene, it’s more often than not when the writers are trying to force something that doesn’t align with the character’s arc, and then I go off and start my grousing.   Regardless, this trend seems indicative of the fact that Dianna, as an actor, gets it.  It seems clear to me that she understands Quinn and what she is, and should be, as a character.  She’s grown into the role nicely and she’s impressed me with how she chooses to portray Quinn in the smaller moments.

Of course, it’s the bigger moments that usually work against what Quinn’s character arc should be at this stage, and as Season 2 wore on, this became increasingly apparent.  Any semblance of storyline she’s had this season has been in conjunction with Sam, the Cheerios, or as a weird assist in the Finn/Rachel dynamic.  Is this independence?  I think not.  At least the first four episodes present us with a Quinn who could be hiding some development underneath a thick skin and lack of storyline, and I personally was satisfied with this assumption.

But after “Duets,” through to “A Very Glee Christmas,” it became clearer that whatever was influencing Quinn’s early Season 2 demeanor was merely a fluke, or at the hand of Dianna Agron’s interpretation.  I go back and forth on the Quinn the writers have presented us with thereafter.  While she and Sam were compelling in “Duets,” everything after has been somewhat dull, and untethered from any relevance on Quinn’s character arc.  I’m endlessly dubious about this whole promise ring business, because it feels like a step backwards in developing the character.  Promising yourself to someone else is definitely not indicative of independence.  We’ve also gotten some of snippy Quinn back, towards Rachel and Santana in particular, and while I admit it’s not entirely out of character, is still disappointing.

And then there are still all those missed opportunities along the way - with the compelling yet offscreen Quinn and Rachel interaction in “Britney/Brittany,” with Quinn’s religion in “Grilled Cheesus,” with the Quinn and Santana dynamic in “Rocky Horror Glee Show,” and especially with the fact that Beth is only mentioned in stretchmarks and breast milk.

In conclusion: the progress and development of Quinn’s character lies entirely in the intersection of choice, power, and kindness, and striking that balance is something the writers aren’t quite accomplishing.  At the very least, Season 2 has presented us with more screentime for Quinn than she had in the Back 9, and for that I am thankful.  Now, it’s time to capitalize on ways to inform her character naturally through the storylines, and keep her arc moving forward to its logical conclusion, acknowledging her past struggles and evolving her into her future.

And, ladies and gentlemen, thus concludes Quinn Fabray Week.  After seven very long and detailed installments, I think we’ve covered all the necessary bases in breaking down all facets of the character.  Thank you so very, very much for reading all these words.  There are so many of them, and I wish the Glee writers would realize how indicative it is of the potential they have, and are wasting, with Quinn’s character.