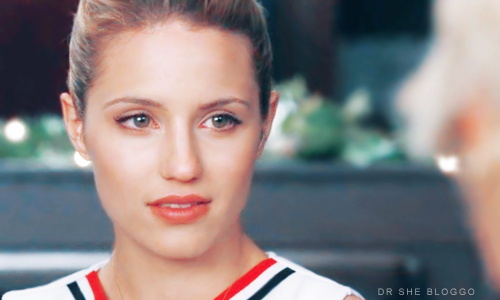 QUINN, SAM, AND HAPPINESS
Here’s my admission.  In a bigger picture, it seems that where the characterization of Quinn Fabray has deviated a bit in Season 2 is in regards to her relationship with Sam.  Now, before the shippers jump on my back, please let me give some (rational, I promise) reasons.

I mean the ship no disrespect.  Quinn and Sam are cute together, and I actually rather like them in “Duets.”  Their rendition of “Time of my Life” is pretty adorable, to boot.  And it is nice to see Quinn happy.  But the thing is, I don’t ship Quinn/Happiness.  I ship Quinn/Good Storyline.  I realize this might make me a bad fan.  And ultimately, I do want Quinn to be happy.  But... she’s a fictional character, and I’m a persnickety television junkie.  I care more about her storyline.

And where, exactly, does Sam fit into her storyline?  Quinn is just one of the shining examples of the Glee writers having no concept of character arc.  Let’s take a moment to examine what Quinn’s trajectory as a character is, and should be.

She started the show as a villain, a Christian character from a WASP-y family with a perfect exterior.  She appeared to have it all.  But this facade began to crumble when she was basically proven to be a hypocrite.  Pregnant at 16, the President of the Celibacy Club.  Sinner, child of God.  Daddy’s Girl, a disappointment to her own father.  Everything that came to define her - how she defined herself - was stripped away.  The things that she loved turned her back on her.  Her family.  Her status.  Her power.  Her control.  One thing didn’t abandon her: the Glee club.

The thing is, Quinn has showed very few signs of ever being happy, truly.  Content, sure.  Satisfied, perhaps.  But happy?  The only non-musical number that comes to mind is the baking scene with Puck - and it’s hard to really ground that in anything specifically meaningful.  No, the fact of the matter is that Quinn Fabray is actually a rather joyless character.  Through everything, she’s shown herself to be stoic and intimidating and moody and vulnerable and hardened, and I want to see why.  I want to see her reconciling where’s she’s come from and where she’s going and who she currently is.  She was unhappy.  She was unfulfilled.  And I refuse to believe that all she needed was a dopey blonde-headed boy to come along and make everything bad go away.  It goes against everything the character is.  Acceptance and a baby changed her life.  Glee Club changed her life.  Not Sam.  The existence of Sam as her boyfriend should not make all the problems go away, as though all she was really lacking, all along, was the right boy to love her.  That is a disservice to her character, and quite honestly, to Sam’s as well.

So yes - it’s nice to see Quinn happy.  But I want that happiness to be deserved, when she works through her character arc and comes to some sort of realization as a person and as a character.  I don’t want Quinn to be happy just because she’s got a boy.  She had a boy.  She had two boys.  Both loved her, in their own ways.  And neither worked out.  And this new boy?  He’s basically an amalgamation of the two previous boys, thanks to some wobbly characterization by the writers.  I just can’t see how Sam could be something new for Quinn, something to progress her character and bring meaning to her storyline - and ultimately, that’s what I want for her character.

I will say, however, that “Duets” did a very nice job exploring the potential Quinn and Sam relationship because they talked.  Sam expressed understanding of Quinn’s situation, and that was lovely and he seemed like someone who might be good for her.  Then they were just relegated to making out for the next few episodes, and then BOOM!  Sam gives her a promise ring.  Oh, goodness.  Too soon!  Not deserved yet, writers!  Just because you have a wedding amongst the adults in the episode does not mean you need to mirror it with the kids!  That’s not a necessary storyline parallel!

If Quinn and Sam are going to continue as a couple, I would like for their relationship to be earned.  They need to have scenes where they are relating to one another and not just kissing or progressing their relationship when we haven’t been given good reason to think that they should.  And unfortunately, the writers are only giving us the latter, and that is when I want to chuck things at the television screen.  In all fairness, Quinn and Sam aren’t the only couple suffering from this treatment, and the advice can be generally applied to all pairings across the board.  We need to be reminded, as an audience, of why these people are dating each other.  I know high school relationships can be frivolous, but television relationships are much better when they have meaning.
NEXT: QUINN, THE BABY, AND PUCK
---

Master Post: CHECKING IN WITH QUINN FABRAY
Part One: QUINN, THE CHEERIOS, AND POWER
Part Two: QUINN, FRIENDSHIPS, AND KINDNESS
Part Three: QUINN, SAM, AND HAPPINESS
Part Four: QUINN, THE BABY, AND PUCK
Part Five: QUINN, FINN, AND HER FAMILY
Part Six: QUINNDEPENDENCE, AND THE MEANING OF THE WORD
Part Seven: CONCLUSION
Posted by DR SHE BLOGGO at 7:57 PM