Finn Hudson and the Case of the Missing Original Intent: Part Two 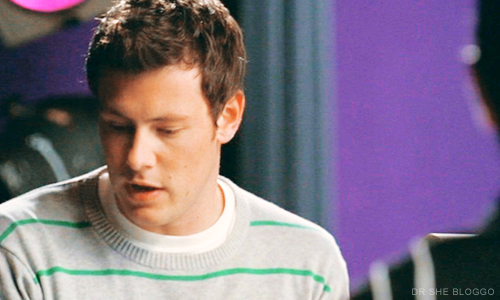 FINN, KURT, AND OPEN-MINDEDNESS
Oh, Finn and Kurt.  Their dynamic has covered so many manifestations, it’s somewhat difficult to sort out.  Early in the show, their relationship was rather simple and darling - it was the Football Player and the Theatre Kid, defying all stereotypes and having an actual friendship.  Kurt, and also Rachel, are character embodiments of what the Glee club represents in Finn’s original worldview.  If Finn stays true to his original intent and opens up to Glee, he should therefore also open up to both Rachel and Kurt.

And in the early episodes, when Finn’s character arc is on track, this holds true.  Finn and Kurt’s interactions in “Ballad” show a real depth of emotion and shared mutual experience.  Kurt helps Finn express himself emotionally, and together they connect on the commonality of being raised by a single parent.  That scene where the two are retrieving Finn’s dad’s jacket to wear to the Fabrays?  Oh, it kills me.  It’s real, and it’s touching, and it warms/breaks my heart every time.

At the very least, Glee does keep returning to the construct that Finn and Kurt were designed to be brothers.  My issues with their relationship largely take place in the interim, during the Back 9 through to the official step-brothering in “Furt.”  (Yes, I just made “step-brother” a verb.  It’s how I roll.)

Let’s pause for a moment to consider this quote that Cory Monteith gave about his character to GQ magazine:

“I think the stasis of Finn gives characters like Rachel and Kurt room to maneuver.”

In general, I would say that Cory is accurate in this assessment.  I interpret things in a slightly different way, though.  My biggest complaint about Finn’s character in the Back 9 is the sudden collapse of his relationship with Kurt due to a not-quite-there-before homophobia.  Personally, I find it to be out-of-character that Finn suddenly had issues with Kurt’s sexuality, even though it’s true that Kurt was being a touch overbearing in the manifestation of his crush.

For the sake of argument: it’s also true that Finn hadn’t always been comfortable with doing things that could be interpreted as gay - note his initial lashing out at Kurt in “Ballad” about singing to a dude.  But what happens in the episode?  He listens to Kurt, takes his advice, confides in him, and treats him with respect.  His actions speak louder than his initial hesitations.  It was designed as character progress, and it was lovely.  As far as I’m concerned, after “Ballad,” there should not be any going back to this issue - at least nothing directly related to Kurt.  Forward, writers!  Forward!

But what should have been a touching new friendship between the Football Player and the Theatre Kid turned into a PSA about tolerance and homophobia.  So to me, it’s not necessarily that Finn is in a stasis that allows Kurt room to maneuver, but more so that he is wielded by the writers to make a statement.

And that, I truly abhor.  I cannot sit through that scene in “Theatricality” where Finn calls Kurt’s decorations “faggy” and then Burt yells at him for what feels like forever.  I just can’t.  Burt’s speech is wonderful and lovely, and I 100% agree with what he is saying, but the conspiring events that led to that speech?  I just can’t get on board.  To me, it’s character assassination.  It feels like Ryan Murphy really wanted to write that speech, and then worked backwards in order to achieve the scenario, sacrificing Finn’s - and perhaps even some of Kurt’s - characterization along the way.

Because Finn?  HE IS NOT SUPPOSED TO FIGHT THE FEELING.  Why, oh why, is Finn still fighting the feeling?!  Yes to Kurt!  Yes to Glee!  We’ve already done this!

But no, the situation and the characters were manipulated in order to make a point, and this is where Finn, and not necessarily his “stasis,” is being abused so the show can hoist a Very Special Message onto its shoulders.  And again, I want to make it clear that I don’t disagree at all with the Very Special Message, I just dislike that storytelling sacrifices were made in order to raise the banner.

I was impressed that the show handled their relationship from Finn’s side of things in “Audition,” with Finn telling Kurt that he came on too strong, but frankly it irked me that that storyline even happened in the first place.  However, I'm not going to complain about the writers actually following through on such a large conflict they insisted on putting in the show.  Consistency is always good.

But rarely is Finn and Kurt’s relationship consistent within the narrative.  I wish it were.  How great would it be if they continued to interact much like they did in “Ballad?”  But instead, we get Finn praying to touch Rachel’s boobs when Kurt’s dad is in the hospital, and Finn doing little to nothing to stand up to Karofsky, and Kurt refusing Finn’s awkwardly adorable pat on the back in “Grilled Cheesus.”  This should not be, writers!  These two characters created a wonderful little trust bubble friendship for themselves in the First 13 episodes, and it’s unfortunately no longer there.

But what’s even more unfortunate is that the writers believe it still is.  Suddenly, they tried to pay off the wisps of this faded friendship by writing Kurt into Finn’s best man speech at the wedding.  This is not how good storytelling works!  The relationship wasn’t properly set up in order for Finn’s speech to be a good payoff.  The sad and unfortunate truth is that the “Kinn” dynamic suffered a roller coaster of negative actions, character assassination, and plain old lack of screentime, and hadn’t yet recovered enough to bring the trust bubble back in time for “Furt.”  Sloppy handling, writers.

All things considered, I am hopeful for the future of Finn and Kurt, because at least the writers seem committed to the Finn/Kurt brotherly dynamic.  The ultimate goal in all of this is to return Finn to his original intent, and right his character arc.  If that happens, that inherently includes a patching up of the Finn/Kurt relationship.  So if we can start cultivating a little renaissance of their early interactions, like we saw in “Ballad,” I’ll be a happy camper.
NEXT: FINN, RACHEL, AND THE FINCHEL CONSTRUCT
---
Master Post: FINN HUDSON AND THE CASE OF THE MISSING ORIGINAL INTENT
Part One: FINN, SELF-DISCOVERY, AND JOY
Part Two: FINN, KURT, AND OPEN-MINDEDNESS
Part Three: FINN, RACHEL, AND THE FINCHEL CONSTRUCT
Part Four: FINN AND QUINN, THE EARLY DAYS
Part Five: FINN, CHOICE, AND PASSIVITY
Part Six: FINN IN THE EYES OF THE WRITERS
Posted by DR SHE BLOGGO at 7:22 PM